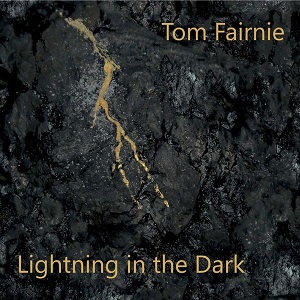 
Tom Fairnie is an Edinburgh based singer songwriter, he did not start performing until the age of 50 and LIGHTNING IN THE DARK is his fifth solo album. Recorded in Austin Texas with veteran producer Merel Bregante, this is Celticana, as Tom calls it, at its finest. This album represents the very best of modern with sessions from players from the US, The Netherlands and Scotland perfectly blended with the tracks laidcd down in Austin and what Tom calls 'the trip of a lifetime' made possible through the 21st century grassroots phenomenon that is crowd funding.

The music is of course timeless, burnished and buffed by experience, collaborations with friend and poet Bob Shields. The result are finely crafted songs with a pared back zen simplicity. "Isn't That The Way" and the brilliant "If You Go West", talk of lessons hard learnt, experience and regret, with Tom's characterful voice breathing life into the stories. "Sleeping On The Streets Of New Orleans" has a, little jazz sparkle with Michal Jesionowski's Soprano Sax and David Webb's electric piano funk adding a little Joni Hejira sparkle. Again Tom's voice adds weight and gravitas to lines about the aftermath of Hurricane Katrina. "No One Knows The Night" and "Better Times" have a lightness of touch, with a Tom Russell pathos carried by angelic chorus vocals and an achingly beautiful Cello and Mandolin parts. "Lightning In The Dark" is, a defiant Country shout into the dark, with lyrics from a Philip Marlowe Noir detective movie voice over.

"Give Me The Good Times" is a solo Fairnie composition, a wry weighty reflection on a life well lived that wouldn't sound out of place on a Rick Rubin Johnny Cash album. "Lightning All Over Sunnyland" is a joyous playful litany of Blues touchstones and heroes, delivered with a smile. "A Quiet Life" is a chillingly dark song, a short story set to music and delivered by Tom at his most world weary as the dreadful situation plays out. "Liberty" is anthemic, poetic lyrics burn bright, drawing power from Mike Dorrien's huge electric guitar with a late on huge slab of electric Folk Rock, a, blast to end the album on.

This is a grower and that sentence about coals and Newcastle, as if it matters, forget it, this is a perfect trans-atlantic meeting of minds, ideas and music. Real life, real voice, telling stories that live and breathe.

Sleeping On The Streets Of New Orleans