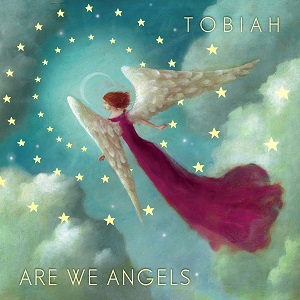 
Based in a cottage in the West Sussex town of Midhurst, Manchester-born Tobiah Thomas has had a life and career marked by both triumph and tragedy, from growing up not knowing her birth father and widowed at 27 to having Janet Jackson and Will Smith tussle over recording one of her songs. This, her second album, certainly falls into the triumph category.

Variously accompanied by Rowan Piggott on fiddle, cellist Caroline Lavelle, Simon Callow (not that one) on piano, bass and percussion and Collete O'Leary on piano accordion, it opens with 'Kiss Kiss', a song which, drawing on the Native American legend of a white rose blooming for ever tear that fell during the Trail of Tears, talks of romantic epiphanies and reveals voice of soaring crystalline purity. Flowers also inform 'Sweet Columbine', another love song that references Native American culture, the dove-shaped flower of the title being used for healing.

With its sparse backing, 'The Coldest Night of the Year' is a particularly atmospheric number that, drawing on her own experiences, talks of the loneliness and isolation experience by those suffering from depression ("No one knew that I was lost/Cos no one knew that I had gone") and sings of her need for help.

Tragedy and loss hover over the traditional folk flavoured 'Apples - The Long Goodbye', a paradoxically sprightly, upbeat melody and la la laahing counterpointing lyrics that begin with a celebration of the seasons before turning to her mother in the final stages of dementia. That intermingling of the sweet and the sour is also at the heart of the title track, a simply fingerpicked, softly hymnal (almost a carol) song about random acts of kindness by strangers, in particular those she experienced after her husband's death that "kept me smiling as I wept".

Its faith in the compassion of others, despite what news headlines might contradict, washes over into the we're stronger together theme of the breathily sung anthemic cascading notes of 'Shoulder To Shoulder'.

Inspired by an 11th century stone church near her home and sitting on one of its pew one New Year's Eve, the simple fingerpicked 'Ancient Church' is about how the peace and the love, spiritual or secular, you're searching for may be closer than you realise, if only you allow yourself to see them. Returning to loss, the penultimate track, the strings-caressed fingerpicked 'Nothing Without Love' is a poignant reflection on how all your dreams or mountains climbed mean nothing unless you have someone to share them with. The album, then, closes with a return to the trials and hopes of Native Americans with 'Trail of Roses', a song built around an improvised track written and played on his old piano by American composer Kenneth Hope. A thoughtful, elegant and disarmingly moving album, in ancient Hebrew Tobiah's name essentially translates as the goodness of God. She's well named.