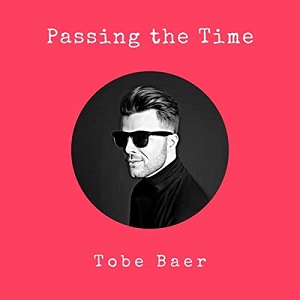 
Whilst not fitting closely within a folk, roots and acoustic definition that most would recognise, Passing the Time marks the first collection of songs released from up and coming Californian singer songwriter Tobe Baer. Inheriting a love and deep appreciation of music from his German mother and Canadian father, he was exposed to a variety of influences whilst travelling and living in different places around the world, including Canada, Germany, and India.

After graduating with a degree in Bioengineering and Bioinformatics, then working as a bio engineer for a year followed by a year of teaching special education students, he decided to pursue a career in music, moving, in 2017, to Germany, living above his brother's, German producer Janosch Roth, studio for almost a year, with whom he recorded dozens of demos. A further move to New York followed. Since then, the 28-year-old has been producing music and video content from his apartment in Brooklyn, as well as performing live at clubs around the city.

This new EP follows the release of a trilogy of singles, and blends a variety of genres over a collection of tracks which recount stories of friends, girlfriends, love, life, aspirations, frustrations and growing up, against a background of living life in a big city.

Opening track, All Gone, has a European techno-groove, reminiscent of A-Ha, with soaring multi-layered, choir-like vocals, whilst the guitar-lead Build A Wall gives ample scope for Baer's rich and distinctive voice to shine on an appealing sultry, soul-like number, perfect summer listening.

Passing the Time, the title track, with its insistent electronic drum beat, and at times what sounds like a modern-day stylophone alongside other digital effects leads into In the Sun, another memorable soul-infused offering which builds to a fine climax via keyboards and brass, bringing to mind the tightness of the best of mid-70's British R&B releases. Final track, The Descent, with lyrics often spoken rather than sung, presents as a more day-time radio-friendly pop affair, inoffensive but hardly memorable.

An album of tracks of the calibre of Build A Wall and In The Sun, for me the two stand-outs here, would be an enticing prospect, as would an accompanying tour with full band, including brass. Tobe could do worse than lending his ears to the masterful Jess Roden in this respect.

I'll Wake When You Do