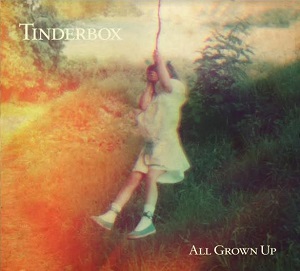 
When your Twitter id is @tinderboxduo and your website introduces you as an award winning acoustic trio, there might just be a bit of a perception problem, but perception problems can be disorientating in a good way, something that stops you from just having the same take on what's been placed in front of you.

It's been five years since the last studio album, "Counting Time" was released. In the intervening years, children have been born, there was time to record a live album, "Live At The Cottage" and Bob Burke has been added to the line up, though the reality is that his has been a part of Tinderbox alongside the lilting and distinctive vocals of Monique Houraghan and picking and strumming of guitarist Dan Tucker, for a while now.

The album takes a journey along the acoustic spectrum, never quite settling on one genre which makes the album difficult to pin down and crucially ensures that each song gets exactly what it needs to bring out the best of instrumentation and narrative. Similarly from my perspective the album title, "All Grown Up", really encapsulates the sense of growing up from several different angles, both personal and how we view the generations that are coming up behind us and to a lesser extent those that are travelling before.

The crucial thing is that it's "All Grown Up" and not growing old. Growing up still gives you a scope to be young and vibrant, still able to surprise, growing old is the road to fossilisation and stagnation. This is definitely an album that retains both life and the ability to surprise, whilst the narrative is more mature, more reflective of the different cards that you play as a family.

"All Grown Up" is a well rounded album, reflective in both narrative and instrumental phases, though not without changes in pace and subject. It's an album that seems to find a way to the play button with ease and you can't say fairer than that.