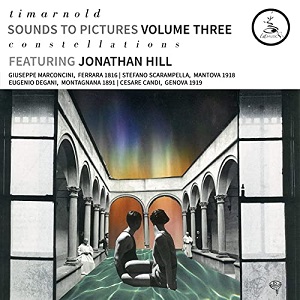 
Constellations is the third in Arnold's Sounds to Pictures series, and the story of its inception is really quite leftfield. Arnold wrote ten compositions, on ten different nights, over ten weeks. Each one was written following a conversation about dreams with Kate Alderton, and was created while she slept and dreamt. At the end of the ten weeks, Arnold was joined by violinist Jonathan Hill to build on the arrangements, and record the violin passages. After that Alderton listened to the album while sleeping and created collages inspired by her dreams, which became the artwork.

So far, so unconventional.

You may not quite know what to expect after reading that, but what has been created here is one of the finest instrumental albums I've heard in a very long time. There are glimpses here of the kind of music you'd expect from the likes of Pink Floyd; a little prog rock mixed in with something a little more new age. There is a constant inventiveness at play that really captures the attention, constantly changing tones and tempos and mixing in all kinds of different instruments. Alderton even joins in with a singing bowl at times, giving the music a really ethereal feel.

Whatever you may think of the concept, there is definitely something of the dreamscape within the songs. Arnold captures the gentle meandering flow and otherworldliness of the place we visit while we sleep. Tracks such as Beautiful You feel like a journey; a narrative with frayed edges that fade the more you try and look at them. Intertreasure Overdrive has the kind of relaxed urgency to it that feels not quite real in its contradictory sounds.

The highlight of the album comes at the very end, with the wonderfully enchanting The Sea Calls. It moves slowly but inexorably like the incoming tide, managing to capture an intense longing for something elusive. The track may be one of the more subtle on the album, but you'll be instantly transported to a place of awe-inspiring beauty.

Frankly, you couldn't find a more perfect album for a little self-isolation escapism. Put Constellations on, and you'll immediately break out to somewhere a great deal nicer than the crazy world in which we currently find ourselves