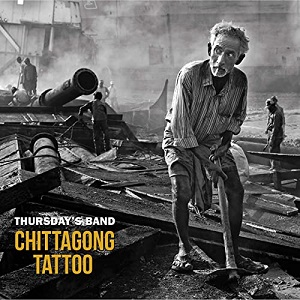 
Coming from a port town with more than a passing interest in old ships, particularly those of the grey funnel line and others of the ocean going variety I was already aware of the Chittagong yards as being places where old ships go to die. I was also aware its where a lot of the ship breakers die. It's cheap and it's nasty, think what Rees-Mogg wants us to go back to to be competitive and it's really pleasing to find the Thursday's Band not only speaking about this, but making it the focal point of their album.

The title song, left as the album finale, really does hammer home just what goes on beneath the tattooing sound of shipyard noise, listen to the album and then google Chittagong and read story after story that could both rightly and sadly be another verse.

Hailing from the Cambridgeshire area, the Thursday's Band are a dual fiddle, dual guitar quartet, Lucinda Fudge and Matt Kelly on the former, Mark Gamon and Nick Blishen, the latter and as with the vocals you have to admire the quality right through.

Three of the four members of the band share vocal duties and whilst I prefer the sharper, more distinct annunciations of Lucinda, there isn't a vocal tone on the album that would encourage you to skip onto the next track, similarly three of the band also write songs, but you wouldn't know it as there is a feel to the album that brings it all together in a collaborative folk/americana style.

Arguably that collaboration is where both band and album gets it strength, whilst it is political in places, it also has lighter concerns as each writer seems to take in different influences from what the world throws out on a daily basis. Sometimes it's the more mundane things that get you, sometimes the profound.

"Chittagong Tattoo" is very much narrative driven, but that's not to say the instrumentation takes a back seat, lord no, there are times when this feels more like a dance album, you can almost feel a late night waltz next to an open fire as the Thursday's Band ease family and friends through an evening of music and song.

In the title song, I would say they have left the best til last, but if you skip straight to it, you will be selling yourself short, this is an album that takes a journey to the destination and it's one you really should join in, "Chittagong Tattoo" is an album that would make any band worthy of a bigger stage.