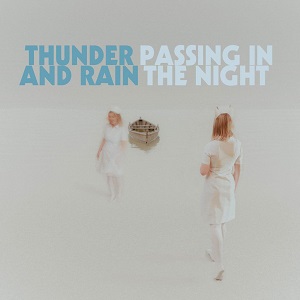 
A bluegrassy quartet from Colorado's Rocky Mountains, this, their third album, arrives in advance of their UK May tour whetting appetites with a lively set of band originals written either solo or in collaboration by singer/guitarist Erinn Peet Lukes.

Opening with the 54-second 'Uncharted', it launches right into toe-tapping form on 'Two Ships' featuring guest banjo from Aaron Youngberg, the lyrics, from whence comes the album title, charting the end of a fleeting relationship, slowing down for the slow waltzer 'House of Light', one of several to feature Allen Cooke's dobro. Originally released on a 2015 EP and inspired by Oklahoma outfit Turnpike Troubadours, 'Run With You' is revisited here minus the drums.

They get more old-timey with waltzing lost love number 'Walk Right Through The Door Of My Heart',Natalie Padilla on fiddle, conjuring vintage Williams and Cline while, again sporting fiddle, the bluegrass-styled 'Falling Down A Rabbit Hole' puts me in mind of Parton. The slower, folksier '10 Hour Flight', this time with Chris Herbst guesting on dobro, is a grow on you highlight with the 35 second fiddle and dobro instrumental 'Get It Together' serving as a bridge back into bluegrassy sounds of 'Make It Better' which, again showcasing Padilla, Lukes describes as "my ode to all of those that just don't know when to stop" as she sings "Like a bug and a light/I ran into you last night and I burned up/Even though I know the game/I'm still flyin' into that flame".

The final stretch begins with 'Uncharted, Farewell', a mandolin-flecked leaving song about pulling up anchor and moving on, a restlessness of spirit where every day's a lesson learnt and a tide to turn. Then, with final contributions from Habst and Padilla, it's back to that old time sound, this time with a Scottish air to it, with the upbeat 'Nobody's Darlin'' before ending with a nod to Lowell George's 'Willin'' on 'Wine And Weed And You', another song where she sings being drawn to "the things that are bad for me" with the bittersweet image of loneliness in the line "I'll spend all my money, I guess/On gas in the tank, and a black lace dress/So I can get my daily dose of/Someone holding me closer". Their last album was called Start Believing, this one is a very good reason to continue to do so.