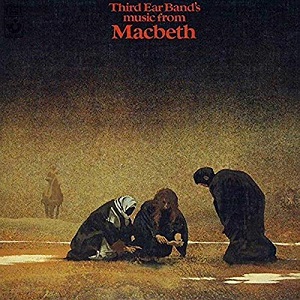 
This soundtrack album was probably the most artistically successful of the Third Ear Band’s records; sadly, though, the soundtrack’s nomination in the 1972 Film Performance Awards came to nothing, which fact, along with other coincidental mishaps and the play’s notorious “jinx factor” and concomitant superstitions may have contributed to the demise of the band not long after…

The film director Roman Polanski had, by the time of making his take on Shakespeare’s “Scottish play”, already made his mark with the classic movies Repulsion and Rosemary’s Baby, and Macbeth was an ideal vehicle for him to continue to explore his favourite themes. And the Third Ear Band, similarly, was well suited to the task of providing incidental music for the film’s soundtrack. At the time, the band had just gone through a period of lineup change following the Elements LP (whose lavishly expanded new CD edition was reviewed here at the end of last year). Original members Glen Sweeney and Paul Minns were augmented by Paul Buckmaster (bass) and Denim Bridges (electric guitar), and (later) violinist Simon House (fresh from the band High Tide and prior to his stint with Hawkwind).

In a studio session in December 1970 they recorded “first versions” of three pieces intended for the soundtrack – Court Dance, Groom’s Dance and Fleance – and these tracks appear for the first time on this expanded edition of the original soundtrack album. Fascinating and most valuable they are too, providing excellent examples of the interactive musicianship that the band members could command. The recording sessions for the actual soundtrack were not begun in earnest until the summer of 1971, and the music was created almost on the spot while viewing rushes, clips from the film itself, rather than using a pre-written score. The resultant music, though necessarily episodic, also had an appealingly organic quality, and it satisfied almost as much when listened to in isolation as when viewing the film. Individual episodes and scenes proved highly memorable, and the character of the music was strikingly eclectic even by the band’s established standards, with a winning combination of grisly and gritty that brilliantly matched the movie itself. There were experimental moments too, with the incorporation of unusual elements such as tangy, fractured electric guitar and a modicum of electronic distortion, also the conjuring of some relatively dense textures. Admittedly, some pieces were more effective than others, but taken in total the Third Ear Band’s music forms a classic film score and its reappearance on this excellent new Esoteric edition is to be highly commended. It comes with a very fine booklet essay too, full of revealing detail and affording a complete historical perspective. The label’s series of expanded Third Ear Band reissues is set to conclude with a definitive edition of Alchemy in a couple of months’ time.