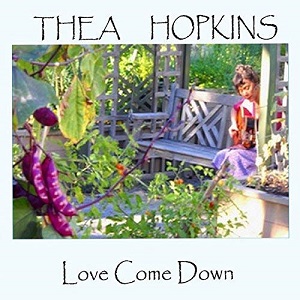 Thea Hopkins
Album: Love Come Down
Label: Self Released
Tracks: 6
Website: http://www.theahopkins.com
.Of African-American, First Nation, Irish and Portuguese descent, a member of the Aquinnah Wampanoag tribe (Mimi Rabson on violin, lazy blues 'Tamson Weeks' tells the story of her great-great aunt, a medicine woman of the tribe), the Boston-based Hopkins first came to attention when Peter, Paul & Mary recorded her song 'Jesus Is On The Wire' back in 2004 (and again in 2010 as an orchestral version). Indeed, Noel Paul Stookey can be found here adding acoustic guitar and harmonies to 'The Ghost of Emmett Till', a social injustice number inspired by the 1955 murder of a 14-year-old black for whistling at a white girl. As with elsewhere on the album, the track's also coloured by Ian Kennedy's violin and jazz musician trumpeter Tom Halter, indicative of the broadening of her sonic palette, further evidenced in the use of Dave Minehan's electric ebow augmenting the percussion waves and banjo of 'Mississippi River, Mississippi Town' with its contemplation of the river's destructive potential.

Along with Tim Ray's piano, Halter's also to be heard on the lyrically intimate 'Almost Upon A Time', the EP bookended by two equally gentle numbers, the rippling 'Love Come Down' with its echoey vocal fades and the lullabying love song 'Until Then'.

Receiving a UK release a couple of months ahead of Europe and the US, this is a good opportunity to ahead of the field in recognising her ever burgeoning talent.

Live At The Atkinson