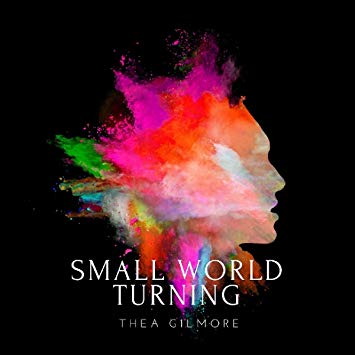 
Thea Gilmore swears. Yup, right there on the gallumping, fiddle-driven 'The Revisionist', an angry song calling for a stand against the rise of the New Right, there's those mutherf***ers waving their flags in the street "throwing hatred like confetti drinking populism neat." It's an invective that encapsulates the anger that runs through the album, but which is also offset with tenderness.

Following an unaccompanied 49-second lullaby of 'Mockingbird', it opens with the percussive lope of 'Cuttleslowe Walls', in which, featuring Ciaran Algar on fiddle and Katriona Gilmore and Sam Roberts on backing vocals, the narrator takes a journey down memory lane to the building of the titular two metre high walls which, topped with lethal spikes, divided Oxford City Council's Cutteslowe estate from private housing to the west, its owner, Clive Saxton worried that 'slum dwellers' would affect sales. The Council bulldozed them in 1938 but were forced to rebuild, the walls only finally coming down in 1959.

A clear symbol of the social class divide, striking a timely note in the wake of the recent controversy in south London where children from social housing were forbidden to use shared play areas in a more affluent community they also serve as a metaphor for today's homelessness as she sings "Where there's a line at the foodbank / Where they're handing soup to the boys on the floor / Where sleeping bags are blocking doorways / You'll see the shadow of the Cutteslowe walls."

Riding a melody evocative of 'This Girl Is Taking Bets', Nigel Stonier providing mandolin and piano with Matt Owens on guitar (they and percussionist Michael Blair her basic basking band throughout), 'Glory' is another venom-tipped swipe at the "brand new history" being written by today's self-absorbed generation worshipping at the altars of botox, coding, greed and TV screens, the world's modern slavery and pocket Hitlers as yesterday's revolutions become just dying embers.

One of only two tracks where she plays guitar, the musical moods shifts for the slow waltzing `Don't Dim Your Light For Anyone' on which, accompanied by Sam Lakeman's piano, Liz Hanks on cello and Cara Dillon on Irish whistle, she calls to remain strong in the face of adversity and of placing her faith and trust in those she loves.

Things get frisky on the scampering, whistling 'The Fuse (Let It All Come Down)', the words tumbling over each other in a hymn to the inspirational power of music set against the fake smiles of the media process with its "photographs of empty spaces / Juke box drafts and whisky chasers" dropping in a reference to 'It's All Over Now Baby Blue' along the way while hubbie and the kids join in on the backing vocals.

Seth Lakeman on violin, Dylan gets another nod towards the end on the bass bluesy 'The Loading Game' with a line from 'A Hard Rain's Gonna Fall', the song following a similar thematic thread of disillusionment with and defiance of today's younger generation where "They all got the cash but they don't got the dreams."

A stripped back, spare piano ballad lullaby, 'Karr's Lament' mingles melancholy and hope balancing images of ghosts in the street, where the "pound store romeos all want to fight / Their breath is thick with jaegerbombs" with that of a night where "there's a full moon..lighting up another stranger's face" and "somewhere there's a song I haven't heard."

Algar on fiddle and Dillon whistle and harmonies, it's back to waltzing territory and a rallying cry for resistance for the folksy 'Grandam Gold', a cautionary tale of men bearing gifts with an eco undercurrent in the lines "We're told that the poison is for our own good / While they dry up the seas and set valleys on fire / The coins on the hill pile higher and higher", a reminder that "wolves do not care for the flowers you've grown."

A loose pub singalong feel embraces the similarly-themed jauntily bouncing 'Blowback', Stonier on slide and piano with Owens blowing harmonica as Gilmore sings about the "new God's gift… a different breed of altruist", the "modern day sir Galahad" who flatters to deceive and "shakes the money from your purse / Every little scrap of worth / He sows those coins into the earth / And fences off his land."

The second outing for Gilmore's guitar, the bluesy 'Shake Off Those Chains' is pretty much summed up by the title, another call to rise up to "tear this palace up / Raise it to the ground / Then pass the hammer on to those / That we built walls around", the revolution driven by Jacob James' gospel hummed background vocals, Matt Burke's trumpet and Seadna McPhail's keyboard bass.

It ends on an upbeat note with a final lullaby, the gorgeous parent to child 'Dreamers', Thea on droning organ, Nigel on keyboard and son Egan on Celtic coloured fiddle that leaves you with the image of stars waltzing softly in the midnight, crickets in the grass, the "whispering of the windsong" as

It's a small world, but it encompasses a universe of heart.

The Fuse(Let It All Come Down)