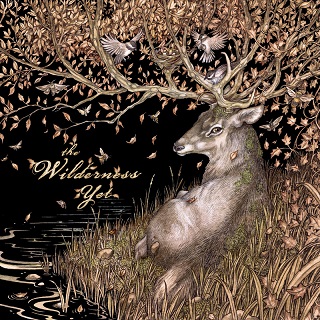 
Taking their name from a line in a Gerard Manley Hopkins poem, the Ango-Irish Sheffield-based trio line up as former BBC Young Folk Award finalist Rosie Hodgson on lead vocals, fiddler and double bassist Rowan Piggott, and guitarist-flautist Philippe Barnes, Hodgson having previously played with them both in different projects, she and Piggott also having released solo albums. On their debut album they're also joined by guests Ewan Carson on bodhran alongside De Dannan members Charlie Piggott (Rowan's father) and Johnny McDonagh on accordion and bodhran, respectively.

They're firmly traditional, even if most of the material is self-penned, opening with Hodgson's 'The Beauties of Autumn', which, inspired by both the name of an Irish march by John Brady and her native West Sussex (you can hear it in her voice) early morning walks, sets the backdrop of the album's celebration of the natural world and the environmental dangers it faces. Showcasing fiddle, it evocatively tells of sporting stags and bucks, birds taking wing, spiders' webs and squirrels gathering their stores as summer gives way to autumn.

Losing their murder ballad virginity early, it's followed by 'A Bruton Farmer', a lively telling of two brothers who brutally despatch their sister's servantman lover while out hunting, she taking revenge by having them hung. The second of her contributions comes with 'In A Fair Country', a song exploring the folklore surrounding the country's native trees such as the alder and silver birch, sung unaccompanied with Hodgson on lead and the others counterpointing on harmonies, the chorus borrowed from a variety of traditional songs.

The first of Piggott's three offerings is 'Queen and Country', a sprightly trio arrangement of a number he wrote for his 2018 Songhive Project raising awareness of the threat to our native bees, the song sung in the voice of one such as she goes about her pollination, the lyric taking on a darker note with the observation that "the colonies now all stand cold/Where there once was a gate to palace of gold/Flanked by guards in their striped livery/You'll find corpses piled high 'cause the honey's run dry".

The first of the tune sets sees Barnes fetch out his whistle for 'Chalice Well', written duringa Glastonbury retreat, the tune paired with Piggott's fiddle and bodhran romp 'The Welcombe Hills'. It's back then to Hodgson and, accompanied by fiddle, 'Woman Of The Woods', inspired by Terry Pratchett's The Witches and drawing on how midwives and female healers were often ostracised and, in some cases, persecuted by the very people they helped.

Returning to the natural world, 'Song Of The Whale' is an Eric Bogle cover, an ant-whaling number set to an old Irish air with droning fiddle emulating whale call giving way to more mellifluous, flute-caressed notes. The second instrumental is 'Hältedyrkan', a Nordic styled polka written by Piggott as a birthday present for his friend Ben Paley and featuring Hodgson on worldless tune singing, while, maintaining a Scandinavian theme, 'Of Men Who'll Never Know' takes a Swedish love song tune as the setting for Piggott's rather less upbeat lyrics about the end of days ("as grief grew unchecked/In our hearts and our minds/Now gone are the gods/And all their creatures great and small/They stand hand in hand/At the ruin of all".

Sandwiched between is another of his, 'The Thrush's Anvil' a vibrant number complete with handclaps written for his RSPB-supporting grandmother, the lyrics a somewhat allegorical tale of a man who goes off in search of a gift worthy of his love, though it may ultimately be about death.

It ends, officially, with, their three voices interweaving, the a capella title track, Piggott's setting of Manley Hopkins's Inversnaid, adopting its final verse as the chorus and adding three more of his own touching on the contemporary neglect of nature ("When all is seared and smeared with toil/Man's smudge and smell ploughed through the soil/He'll plod his shod unfeeling feet/Onwards 'cross the cold concrete") before closingw ith birdsong.

I say officially, as there's hidden bonus track, the traditional Irish Seán Ó Duíbhír A' Ghleanna, inspired by Seán Ó Duinhr a guerrilla leader in Ireland against Oliver Cromwell's attempted conquest, sung by Piggott and culminating in a lively fiddle jig over the pervasive drone.

Featuring a rather fine illustrated booklet, this is another reassuring reminder that the continuing survival of the English folk tradition is in good young hands.