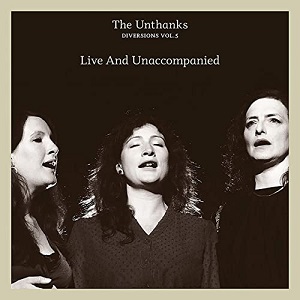 
For the purposes of this extraordinary album The Unthanks are the unaccompanied voices of sisters Becky and Rachel Unthank with Niopha Keegan; and the 'Diversions' of the title are turns to the left and right from the rich orchestrations of recent Unthanks releases and the swelling charms of a BBC Proms examination they passed with colours flying.

This is anything but richly orchestrated. This is bare, unadulterated, vocal majesty as rich and evocative as it gets. It's an echo of the tradition in which Becky and Rachel grew up and with Niopha, the Unthanks' regular violinist and additional vocalist, completing the band-within-a-band the wider world heard on the version of Davey Dodds' Magpie used in Mackenzie Crook's eloquent and touching TV sitcom Detectorists.

The song also appears here, but not as any kind of 'greatest hit'. Far from it in fact, for the album is compiled from recordings of 31 live shows on a five-week tour last Spring in which the three performers fully examined the storyteller's art in front of an audience - a story needs an audience, after all, so the live stage rather than the studio is the natural home for the unaccompanied singing of these songs.

There are many highlights across the album's 13 tracks and even more within each song, but the command of their art and the clarity of purpose, vision and execution heard on the version Richard Dawson's achingly beautiful We Picked Apples In a Graveyard Freshly Mowed is, frankly, exquisite.

In truth though there are moments all across this record to take take your breath away - from Niopha's agonising lead on the traditional I'm Weary of Lying Alone and the desperate sadness that underpins the Connie Converse songs Bees and especially One By One; to the boisterous, bawdy Geordie Wedding Set that comprises We'll Aal Be Wed In Our Auld Claiths and Hi Canny Man.

The steely drone that backs their reading of Johnny Handle's Guard Yer Man Weel stretches English vocal tradition into the realm of jazz; while the late Mimi Fariña's stirring Bread and Roses is as apposite today as it has ever been and in the closing Farewell Shanty they have a showstopper that literally brings the house down.

Forget the easy categorisation, this is premium grade music of any stripe.

The release also incorporates As We Go, a handsomely captured film of life on the road through the eyes of its maker, BAFTA-award winning animator Ainslie Henderson complete with behind the scenes footage, scenes of family life (Henderson is Becky Unthank's partner) and additional performances in spaces found on the tour.