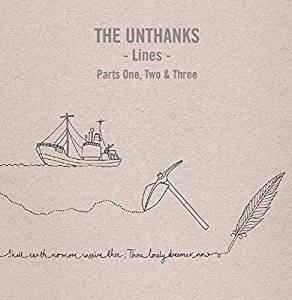 
Lets get this out of the way at the start - this is a sublime, and beautifully executed series of releases by The Unthanks. If you like them, you'll love this; if you're not an Unthanks fan, then put away your prejudices and give these tracks a listen! You will not be disappointed.

Lines is a trilogy of song cycles inspired by the work of (mainly) female poets. Available as 'medium play' records on 10" vinyl, CD or download, they can be bought separately or together in a slipcase. Lines 1 focuses on the poems of Hull ?shing worker Lillian Bilocca. Lines 2 uses the work of male and female World War One poets, and Lines 3 concentrates on ten poems of Emily Brontë. Whilst originally composed at different times and for different reasons, these three projects also work as a single trilogy of song-cycles - partly due to the intimate, small group settings (piano and voice, with some additional violin, bass and drums) of all three.

Lines Part One, LILLIAN BILOCCA
The songs here were originally written and performed by The Unthanks in 2017. They provided the soundtrack for a theatre piece - The Last Testament Of Lillian Bilocca - written by Maxine Peake and directed by Sarah Frankcom, for Hull City Of Culture. The piece celebrates the campaigning work of Lillian to improve safety at sea for fishermen, following the triple trawler disaster of 1968, in which 58 men lost their lives.

Lines 1 features 5 tracks: an instrumental prelude, Lillian and an instrumental finale, Lillian II (The Banqueting Hall Scene), written by pianist Adrian McNally (Rachel's husband). There are also three songs, two with lyrics by Maxine Peake and music by McNally: A Whistling Woman and The Sea Is A Woman. The final song is Lonesome Cowboy, by French Jazz Composer Claude Bolling and Jack Fishman. While the topic reminds me of Ewan McColl's 1960 Radio Ballad Singing the Fishing, the style is less folk than contemporary music or chamber jazz. The instrumentation is gentle - piano, harmonium, violin (Niopha Keegan), pedal steel guitar and bass (Chris Price), and some tasteful drumming by Martin Douglas - and the pace slow and mournful. I particularly like The Sea is a Woman, which builds upon the refrain of the Prelude, and makes full use of the harmonies of the Unthank sisters. Lonesome Cowboy represents a brilliantly atmospheric arrangement of a great tune.

Lines Part Two, WORLD WAR ONE
This set consists of six songs, based on the work of both male and female poets in or about the Great War. Four songs set the poems of War Poets to music, including Siegfried Sassoon, Wilfred Gibson and lesser known female poets Teresa Hooley and Jessie Pope. The music was originally written in 2014 for a project marking the opening year of the World War One centenary.

The opening track Roland And Vera features Sam Lee on vocals, who spent time researching personal stories from rural communities in the South West of England. With swinging brushwork by drummer Martin Douglas, this has the jazzy feel of a Pentangle track (but with strings!). The remaining tracks tend to be quite short and suitably bleak - often with little more than piano accompaniment; various members share the vocals. Stand-out tracks for me are Breakfast (eating it whilst lying flat on your back, as the shells pass overhead) and the Sassoon poem Suicide in the Trenches. As with the first Part of Lines the style a mixture of folk, jazz and classical - especially due to the dominance of piano and voice.

Lines Part Three, EMILY BRONTË
The Lines trilogy is named after one of the Emily Bronte poems, which features in Lines Three. It is one of nine poems by the writer usually more popularly thought of as a novelist. The music was written and performed by Adrian McNally on Emily Brontë's original piano, in her former home, The Parsonage in Haworth, West Yorkshire. This rare example of a 5 octave cabinet piano was probably made in London between 1810 and 1815. With the Bronte Parsonage now a working museum, the writing and recording had to take place after nightfall. McNally wrote the music for the whole record in his first evening at Emily's piano, before spending the rest of his residency working on the songs by day on a beautiful German upright at his lodgings in nearby Ponden Hall - another house associated with the Brontes. McNally would then take his work-in progress into the Parsonage to road test them on Emily's piano in the evenings, before weeks later, returning with Rachel and Becky Unthank to record the songs, using Bronte's piano, again into the night.

Perhaps most eye-catching of all amongst this trilogy of poetry inspired song cycles, Lines Part Three was commissioned by the Bronte Society to mark Bronte's 200th Birthday. The songs are performed and arranged by the Unthank sisters and McNally, without the rest of the band. The full track listing is:

1. The Parsonage 2. Shall Earth No More Inspire Thee 3. High Waving Heather 4. She Dried Her Tears And They Did Smile 5. The Night Is Darkening Round Me 6. Deep Deep Down In The Silent Grave 7. Lines 8. Remembrance 9. O Evening Why 10. I'm Happiest When Most Away.

The nine songs are again quite sparse and bleak, (the first track, The Parsonage, is a collage of sounds in the building, which sets the scene). The "wild and windy moors" around Haworth are recreated though the solo piano accompaniment, and the words of Bronte. As Becky Unthank comments in the promo film online:
"Emily Bronte's poetry is very passionate and dark, and that's something that we always look for in material"

Some of the songs are closer to folk music - High Waving Heather and the ballad-like Remembrance - others more like contemporary classical poems, or even lieder. Among the latter, Lines itself (the longest track, at 7 minutes), and The Night is Darkening Around Me seem to bridge the gap between folk and classical.

Taken together, the Lines trilogy must represent one of the most sophisticated and ambitious additions to contemporary acoustic, folk- based music of 2019 so far.