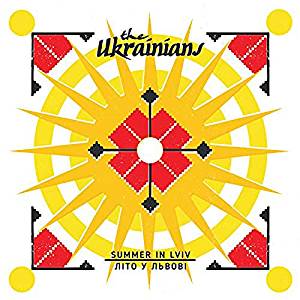 
After having had my first cursory listen to "Summer in Lviv", I started this review wishing I could speak Ukrainian. This album bounces from the very first chord, with impossibly catchy rhythms and choruses that you sing along to irrespective of language. In these days of our own austerity we need more than ever music that make us feel happy. This work is at times Europop party music, it is folk music, and it is delivered in indie punk rock style, and while the music may transcend language there are important historical and cultural messages throughout. This is an album with hidden depths.

If you are not at least smiling or tapping your foot within ten seconds of the start of "Zvidky Vy?" (Where Are You From?), then is probably something wrong. It's a song that signals in no uncertain terms that this album is going to be packed with energy, and it's also a song of exasperation at the continuing and rising intolerance towards immigrant communities.

"Dyad'Ko Zenko (Uncle Zenko)" is a song of homage to an uncle who "told me tales about life". It celebrates the art of story telling through the generations, and is very much one of those songs for which I wish I had the full translation. The rhythm for "Koly Ya Tantsyuyu (When I Dance)" could have come from a System Of A Down song and it's all about the joy of dancing.

I found myself singing along to the chorus of "Cherez Richku, Cherez Hai (Across The River, Over The Grove)" without at first knowing what it was saying. The song begins with a chord sequence very similar to "Into the Valley" by The Skids, reinforcing this band's punk credentials. Carrying on from the previous song, it has a traditional structure, this time starting slow and gradually achieving a manic finale.

In contrast, the title track "Lito U Lvovi (Summer In Lviv)" feels more like a standard rock offering. The title track is an optimistic song - "everyone awaits a better future" - that hints at things in today's world not being quite right. "Blada Pro Fedora Vovka (The Ballad Of Fedir Vovk)" takes on a darker mood for this ballad about the provision of food for the poorer communities and the rescue of Jews from the Nazis: "whoever saves one life, saves the world". Although the full story is too long to tell here, Vovk was school principal who became chief agronomist of the land council in order to help feed a starving population. He is also credited with helping some escape the clutch of the invading Nazis. When the Soviets returned Vovk had to continue his work in exile as founder of the Ukrainian Supreme Liberation Council.

The bouncing "Sterezhistsya Kozakiv! (Beware Of The Kozaks!)" is a politically charged, anti-war song with an upbeat mood, followed by the beautifully presented, beautifully sung ballad "Chy Znayesh Ty? (Do You Know?)". This has a slower pace and is probably my stand out track on the album. "Hey Sokoly! (Hey, Falcons!)" is an early 19th century traditional folk song (sung across Ukraine, Belarus, Poland and Slovakia). This takes the slower pace of the previous song and builds it seamlessly to a bouncing crescendo. The following two songs are also from the folklore of the region. "Tsyhanochka (Gypsy Girl)" is a popular Ukrainian folk song, first recorded for The Ukrainians' "Kultura" album in 1994, and "Shchedryk (Assume the translation is 'Swallow'?)" is based on pre-Christian folk chants and a traditional folk tale.

"Festyval (Festival)" needs no translation! It carries with it a festival spirit of inclusivity, respect, equality, and peace. Returning to themes of folklore, "Dva Vinochky (Two Garlands)" is a song based on the words of 19th century poet and linguist Yakiv Holovatskyy. The album wraps up on another positive , optimistic note and celebrates this whole work with "Shche Sto Hram (One More Drink)".

On a superficial level this could be described as an album of relentless fun (NME reviewed it as "I ended up taking their record to bed with me and now I'm going to have its children"), but it is much more than that. Musically it is highly accomplished. It is vocally passionate. But dig a little deeper beneath the surface and you will discover it has hidden depths. I love it.