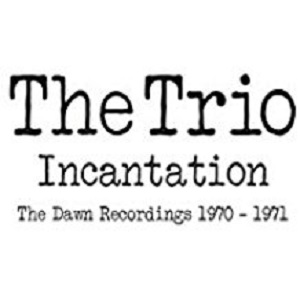 
The Trio was a groundbreaking progressive-jazz ensemble that came together in 1969 in what was the most promising of musical climates. It consisted of John Surman (baritone and soprano saxes, bass clarinet), Barre Phillips (bass) and Stu Martin (drums). These three musicians had already established reputations in the jazz world as regards technique, musical excellence and intelligent experimentation, and had the desire both to push musical boundaries in their work and to appeal to the emerging open-minded “progressive” or “underground” music scene where barriers were determinedly down. A scene which was already embracing the singularly enterprising experimental music of (inter alia) Pink Floyd, Caravan and King Crimson, and was shortly also to take on the more obviously jazz-influenced or -oriented outpourings of the likes of Soft Machine, Frank Zappa and Manfred Mann Chapter Three. Hence The Trio’s regular appearance on concert bills with acts such as Yes and Captain Beefheart (with some of whose wilder Trout Mask Replica moments can be heard something of a kinship) – and their signing to Pye Records’ newly-formed progressive label Dawn Records (home at various stages to acts including Man, Comus, Mungo Jerry and Trader Horne).

Surman himself was in 1969 already widely acclaimed for earlier albums he’d made for Deram and subsequently a series of live appearances fronting an octet that was pushing the boundaries of both rock and jazz in the Marquee’s “New Initiative” concerts shared with King Crimson. But his individual encounters with Barre and Stu fuelled a desire to play together, and the result was both raw and elemental and intimately white-heat. And importantly, each player was of equal musical stature and importance – it wasn’t like a soloist supported by a rhythm section. The Trio’s debut record, released in 1970, was a double-album dose of the musicians’ manifesto, an uncompromising sequence of unadulterated progressive-jazz that clearly had its roots in later bebop (Archie Shepp, Ornette Coleman, latter-day Coltrane et al.) but took their gestures forward into the contemporary milieu. Inevitably, then, this isn’t “easy listening”, even by the admittedly impenetrable standards of much progressive jazz, but actually it’s not so difficult to become enraptured once you’ve found the groove. And it’s so totally exhilarating, this quality bleeding through the grooves throughout.

Even so, there’s no escaping the intrinsic dual-character of the music, restless and jittery on the surface yet embodying a certain placid nature by its very measure of control, a degree of invention that offsets and belies the apparent chaos of its tumbling cross-rhythms. Some of the shorter compositions near the start of the set may seem fragmentary, unfinished even, but those forming the original vinyl second disc in particular are just amazing, running the gamut from smouldering, brooding intrigue (Centering) and subliminal eastern incantation (Billie The Kid) to lyrical expansiveness (Dee Tune), full-blown vocalised drama (6’s And 7’s) and cataclysmic epic (Green Walnut). But whatever the canvas or track length, the musicians always employ the individual instrumental timbres with understanding and sensitivity. The guys know their instruments inside out too – some 90% of the music you hear is pure improvisation, yet it never feels insular or indulgent. The soloing emerges naturally from the playing, without charge of obligatory cliché. And even a track labelled Drum, self-evidently a solo vehicle, makes textural silences as crucial as creative virtuosity. Overall, the feel of “let freedom ring” getting-it-together has rarely been more persuasive – and has been particularly well captured in the studio here (not an easy feat). And its peculiar packaging – with cover photo of close-up full-on staring cow – was a maverick statement in its own right, far removed from the contemporaneous Hipgnosisserie imagery (yet equally far removed from the simple “File Under Jazz” trad brigade).

The Trio’s subsequent (1971) album, Conflagration, grew out of The Trio’s time on the road and the abundant energy and creativity that flowed. It sported a title that mirrored a wider pooling of talents, the core threesome having invited into the studio members of the group Circle who were also touring around Europe at the same time. In the end, only Chick Corea and Dave Holland were able to make it into the studio, so ten extra players (including Mark Charig, Alan Skidmore, Nick Evans, Malcolm Griffiths, Kenny Wheeler and John Marshall) were enlisted. The result was a challenging disc, even more so than The Trio’s debut double, with even more in the way of high-velocity thorny, jagged invention – and once again, recorded with exemplary clarity and presence yet without breaching clinicality. Latter-day big-band has never sounded finer. For the music is full-on physical and totally uncompromising – not least in its sheer commitment – and for the listener too proves a compelling, brilliantly cleansing experience.

So, the current Esoteric release Incantation is an anthology (as opposed to a compilation), which usefully collects together under one roof both albums The Trio recorded for Dawn. There’s no bonus material and no outtakes, but the complete contents of the original releases are here and the two CDs are consequently well-filled (nearly 2½ hours of music in total). Coming with a generous booklet containing a great contextual essay and exclusive interviews with Surman, Phillips and producer Peter Eden. As an accurate embodiment of the intense creative spirit that animated The Trio’s music, this is a tremendous, and superbly remastered, reissue.