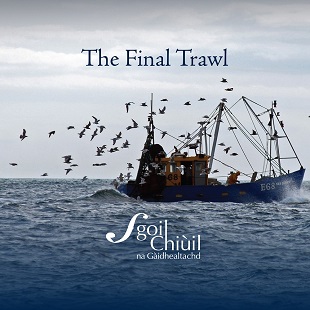 
THE FINAL TRAWL is the nineteenth annual CD produced by the students of the National Centre of Excellence in Traditional Music, that the centre exists at all is impressive, that this is nearly the twentieth year of these acoustic music yearbooks is doubly impressive. Since opening in 2000 the West coast Centre has become established as a place where talented young traditional musicians can develop their skills to the full. With many of the Centre's former musicians now established names on the traditional music scene, there is a feeling that this double cd is a kind of directory of future talent. It is fair to say that many learners have followed other career paths, but if these twenty-eight tracks are anything to go by, all of their lives are enriched by music.

There are the fast tunes, like "Hamilton's Rainbow", the set written by leading piper Terry Tully, layers of accordion, the unmistakable highland pipes here played by Finlay MacVicar. There is the bouncing almost jazzy "Stilton in the Caravan" with the melody carried between tune writer Louden MacKay's accordion and James Bauld's flute. Lovely dexterous guitar from Gillie O'Flaherty's guitar. The album is not titled as an indication of closure at the Centre, but rather for the ensemble's fine version of "The Final Trawl", Archie Fisher's sad song about the decline of the Scottish fishing industry. The multiple vocalists on the chorus gives the song an uplifting edge, despite the melancholic nature to the tale it tells. "David Robinson", written by Loudon MacKay to mark the passing of a local man, is another beautiful slow tune, with Loudon, Kenny MacKillop, Finlay, James, Tabitha Beavitt, Hollie Cook, Mairi Taylor, Rona MacLeod,Gillie and Mairi Taylor building a reflective atmosphere. "The Seals Of Plockton", written for the areas beach life is a wonderful duet showcase for James' Whistle and Gillie's guitar, both slow and reflective and more frenetic on "Turning The Clock Forwards" the second tune. "O'Fair A-nall Am Botal" is an Gaelic song, sung by Finlay with a spry jazzy trio of players behind him who can bounce and create atmosphere as they do on the almost 'Prog' end section. "Taobh Abhainn" is an upbeat Gaelic song, Finlay who sings here first heard it performed b the amazing Niteworks, accompanied by James and Gillie the version here is atmospheric and stirring. "Mrs MacRae" is a first for me, a piece played by three accordions, an opportunity to hear the drones and notes from three fine players swirl around each other on the slow title piece of the set, the more lively "Nuggets" and the expansive "The Inevitable Journey". "The Fantastic Pie" is a set of tunes written by former centre students, another thing to celebrate, here played by three fiddles, like the accordion tunes you can lost in following,Tabitha, Hollie and Rona, the players as they follow and weave around each other. "Deliverance" the haunting Norwegian waltz, celebrates the reappearance of the sun after the winter months and is beautifully drawn by Hollie's fiddle and Gillie's reflective piano.

A proclaimed big set of tunes "Fren'ship" opens the second disc, with the albums first use of drums, played by Calum MacKinnon, driving the set on a pace. "ABC Puirt" is a similar big band of some gaelic music. "Bastavoe" is about contrasts with the spry piano of Jorja Campbell on this livelyset of tunes. "Elliott's is a wonderfully percussive pulsing tune introducing cello and clarinet to the album, going to these ears far beyond traditional music. "Flake" is another strong performance, with Cara Slaughter's almost classical piano motif and Niamh MacLennan's cello joining Tabitha on fiddle. That pulse is back with spirited piano and an almost Philip Glass minimalism to the fiddle and cello on "The Rescue Bee". The second disc also had some fine vocal performances the ensemble voices on "Ye Jacobites By Name" and "Bdach Innse Chro and Eilidh's fine mouth music on the "A' Bhonaid Aig a'Ghobhair" set. "Mrs Jamieson's Favourite is a showcase for Eilidh's atmospheric clarsach and Cara's classical piano. The final three pieces almost work as a suite linked by piano, Calum plays on "Taladh Dhomhnaill Ghuirm" and behind Finlay's striking collected traditional piece about the highland clearances, "O Teannaibh Dluth Is Tpgaibh Fonn". "Beal na mBlath" a final reflective duet between Cara on resonant piano and Zoe Wilkie on drone like accordion closes the set. The tune is the Irish Gaelic name given to the small town on the west side of Cork in Ireland, the site of the assassination of Michel Collins, in whose memory the tune was written. The melancholic nature of the tune is balanced by the fact that this was the tune that Cara played during her audition for the music school in 2017, so it also looking forwards which I guess is the perfect point to end.

This is a huge set with twenty eight tracks drawing on twenty one players, I have found myself drawn to some tracks more than others, which is inevitable, you may find other gems and there are others to find. I find the breadth of this collection, talent on show and the fact that this is the nineteenth such acoustic yearbook hugely encouraging. THE FINAL TRAWL demonstrates again and again the rude health of Scots Traditional Music. The title is ironic and the could be further from the truth if it tried.