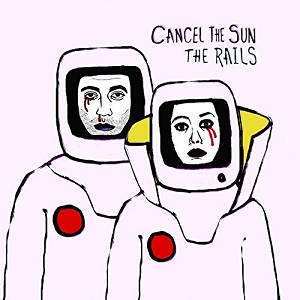 
The Rails (Kami Thompson and husband James Walbourne) have already built themselves quite a reputation over just two albums and some dynamic live shows. Their “difficult third album” is the first to feature exclusively self-penned compositions, but doesn’t suffer in the slightest for that; instead it’s positively brimming with a confident, thrusting power, although the intense chemistry of the duo themselves is clearly also being solidly nurtured by producer Stephen Street on this occasion.

The album seems at first to be pursuing an altogether more rock-influenced course than its predecessors, judging by the punchy, riff-heavy opening track Call Me When It All Goes Wrong, which builds on the more electrified-guitar-heavy approach of much of the duo’s Other People album, also taking a certain cue from James’ work with The Pretenders. This heavy-duty jangle pervades other tracks too: reverberating memorably through the handclapped rhythms of The Inheritance, complete with tough, twangsome Thompsonesque electric, while the chugging riff of Ball And Chain harks back to the opener and Waiting On Something finds James on more strident form, again unavoidably recalling Kami’s dad.

Softer and more acoustic-based quasi-orchestral keyboarded (synth, organ, piano and mellotron) textures are brought in for the gentler waltz-time Mossy Well, the curiously folk-baroque Dictator, the melancholy reflective Leave Here Alone (this one complete with some harmony vocals uncannily reminiscent of classic Everlys) and the slow-ballad lilt of Something Is Slipping My Mind. While the disc’s title song, which closes proceedings on a thoughtful note, has something of the feel of a dreamlike show-tune standard (in contrast to its doomy lyric) – that is, until it finally bursts forth in a blazing air-guitar solo before its cryptic backwards-tracking close. But perhaps the most impressive track of all is Save The Planet, which in spite of a rather obvious slogan-title actually directly confounds overt expectations with its confrontational (albeit perfectly logical) lyric couched in Kami’s reassuring vocal and an intriguing musical arrangement.

And surely that’s the point too, then – with lyrics every bit as strong as the intelligent and forthright musical backdrops, Kami and James have now successfully made the transition from extremely good folk-rock wannabees with plenty of ideas and imagination to first-class songwriters with an even more assured ear for interesting, revealing and thought-provoking musical arrangements. So, to save the planet, maybe we ought not cancel the sun while it’s still burning this brightly? Hmm…