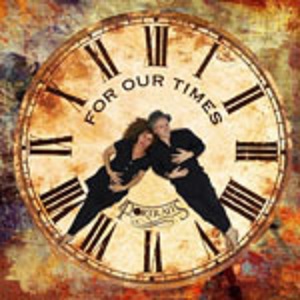 
"For Our Times" begins with the immense "The Chain", a song that summarises the Portraits' reason for being, further confirmed by their daily 'Lifelines' videos. "We are links in the chain and the chains make us strong" evokes the power of community and collaboration, working together rather than in isolation, in a gentle poke at our dysfunctional political world.

"Penniless Porch" raises the pace and in typical Portraits fashion a happy tune backs some challenging and politically charged lyrics: "will you please move your suffering elsewhere" and "in 2019 what does progress even mean?". We can no longer afford as a race to turn a blind eye to the divisions that are being created in our own society and in countries across the world.

"Harmonise" gives me the opportunity to heap compliments on Jeremy and Lorraine Millington for some of the finest harmonies in British folk music. There is an ease with which they blend their words and never at the expense of clarity of delivery. The song itself is one I had heard long before the album release. The lyrics to these songs should be compulsory listening, because they effuse inclusion, collectivism, and love: "If only we harmonise, we can dry her eyes".

The gorgeous introduction to "For Our Times" is followed by some of the finest lyrical moments on this excellent album "passion and opinion making not the tiniest ounce of sense, yet again I punch the air my anger released" and a really clever key change for the chorus. The Portraits are both highly accomplished musicians who are skilled in their selection of moods, instrumentation and when to add the lyrical punch.

Lorraine's a capella introduction to "Except For Me" again enhances the message, in an utterly beautiful song that should be on every music lover's playlist. I don't often get moved to tears, but this song got me there. The album finishes with the single version of this song, but the album version is to me, perfection.

"Look At Me" lifts the mood with a comedic poke at the narcissism of modern life. We are losing the ability to communicate with each other and are becoming blind to the world around us, such is the current obsession with personal image, chasing an unachievable goal. "Wonderland" again shows why The Portraits should take a place at the top of the tree of British Folk music. Masters of mood, they produce here perhaps the highlight song from the album with lyrical gems such as "drowning our children in a future of fear".

When I saw the title Those Were The Days" I immediately thought of my early teenage crush on Mary Hopkins, but within seconds of Jeremy's piano introduction, she was soon forgotten! "The world is rewinding. Quick, stop press play". These are truly engaging songs, cleverly arranged, beautifully delivered and lyrically both warm and at times acerbic. "Wrong Kind Of Love" is an unexpectedly bouncy song that continues the theme, and it is lovely to hear the inclusion of a 'round' in the final build to this uplifting piece.

"Skins" starts with the voice of one of the world's greatest news reporters Feargal Keane, adding further weight to the message behind the song, because in isolation our messages can fall flat. It is in community and cooperation that they carry the greatest impact. Here harking back to those heady days of freedom in South Africa "digging for victory against the tide, preserve apartheid in formaldehyde". Wow guys! "Difference No Difference" continues the theme of inclusion "If I'm imperfect then aren't we all", in another masterful vocal and lyrical performance.

Consistent theme and powerful messages can sometimes overwhelm the listener but The Portraits provide such musical variety on this album that you never feel you are being preached at. It's an album of gentle persuasion, but also unafraid to tackle head on some of the deep failings of our world. "Come Today" presents more cleverly persuasive lyrics: "You never owned their lives. They were not yours to take" and then finishes with the inspirational words of Greta Thunberg.

Continuity is one of the triumphs of this work. "Horizons" describes "the great challenges of our times", such as that which the teenage Thunberg has taken on to the embarrassment of those we have elected across the world as the guardians of our future. The uillleann pipes in "Except For Me" (single version) just made me want to listen to the album version again.

The Portraits' cooperative spirit will long outlast the divisive and short-sighted politics of those who are the target of some of their lyrics. Two beautiful people exuding warmth and kindness, while presenting us with a masterpiece. We all need more of this.