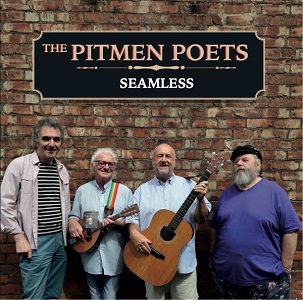 
The inspired teaming of four of the north-east’s finest folk entertainers (listing them alphabetically as usual: Bob Fox, Benny Graham, Jez Lowe and Billy Mitchell) was first realised in a special show just under five years ago, since which time the Pitmen Poets’ onstage get-togethers have been the stuff of legend. Considering their multifarious commitments and consistently high profile on the folk scene, it’s been miraculous how the four men have managed even to get together, let alone rehearse and perform these shows, so it probably comes as no surprise to discover now that the Pitmen Poets’ upcoming UK tour is destined to be their last – ditto the accompanying CD, Seamless (the third in the series, following one live and one studio set).

Seamless definitely displays a strong feeling of continuity with its predecessors, for it features alert, vibrant performances of songs of the coal-mining tradition of the north-east, with the choice of lead vocalist for each song (as always) cannily configured to reflect the character of the song and play to that singer’s strengths. So we’re treated to keenly authoritative renditions of Trimdon Grange Explosion (Bob), Pitman And The Blackin’ (Billy), and the lesser-known Johnny Handle song Mr. Roberts (Benny), while Jez delivers definitive accounts of his own compositions Last Of The Widows and The Boys Of Belly Row. Bob’s version of Guard Your Man Well is tender and understanding, while Benny shows his special empathy with the songs of Tommy Armstrong on Birth Of The Lad (in his book, this is the Tommy Armstrong song! – and it shows in his account). As on previous CDs, the singing’s great, their ensemble work is superb, the instrumental accompaniments bright and lively, apt and fully accomplished.

The album’s described as a selection of the band’s most requested songs, recorded live on the last tour at Queen’s Hall, Hexham (some complete with intros), plus half-a-dozen newly recorded tracks including the brand-new Jez Lowe song Leather Cap And Trap Lad which was written specially for the group and proves yet another fine addition to the already extensive and impressive Jez Lowe catalogue. Two of the tracks feature guest artists – the live dash through Off To Kefalonia brings Ellie Fox‘s clog-dancing onto the stage, while the East Durham Massed Brass Bands play Gresford (The Miner’s Hymn) as a prelude to Benny’s recitation of the Bob Davenport monologue Geordieland ’68: an emotional moment, for sure.

I can’t for a moment quibble with the actual song selection, although I did experience a minor measure of disappointment in discovering that three of the songs (coincidentally, all Jez-penned ones) are duplicated from the band’s second CD (2017’s More Black Diamonds). Especially so, perhaps, considering the depth of the Pitmen Poets’ combined repertoire has almost certainly not yet been entirely plumbed even in five years and three albums. And maybe this intentionally-final Pitmen Poets collection feels a mite disjointed in comparison with its predecessors (although it doesn’t seem like a tying-up of loose ends either, to be fair). It’s just that this mix of live and studio recordings doesn’t quite flow or live up to the seamless nature of its title. But that’s more of an observation than a serious criticism, and fans of any or all of these four excellent musicians will both revel in their performances and cherish this memento. Champion!

And by the way, the tour starts on 16th October; plenty of dates, all over the shop – so don’t miss out!