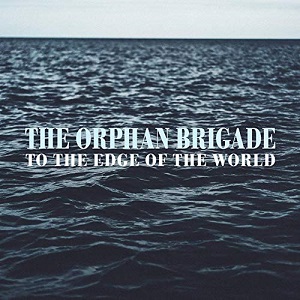 The Orphan Brigade
Album: To The Edge Of The World
Label: Self Released
Tracks: 14
Website: http://www.theorphanbrigade.com


I've always been a sucker for pipes: bagpipes, Northumbrian pipes, uilleann pipes, so when an album hits you square in the face with a tune like "Pipes Intro" it immediately grabs my attention. What follows is not exactly what I expected, with country rock rhythms and a hugely powerful rock voice belting out "Mad Man's Window" and a chorus that fringes 1970's psychedelia, and then more pipes. It works tremendously well.

The Edge of the World is rooted in Irish folklore, and Mad Man's Window tells of a man distraught at the loss of his sweetheart through drowning, with the 'window' being a gap in the rocks through which he awaits her return.

"Banshee" is presented as a country song but its subject is the familiar female spirit that warns of the impending death of a family member. This is a gently paced song with some terrific backing vocal layers and an incredibly catchy chorus and an ethereal vocal interlude that helps to give the lyrics space to breathe before the final chorus.

"Under the Chestnut Tree" tells of a Spanish nobleman being buried in a foreign land following the sinking of his galleon off the Irish coast. The chestnuts in his pocket grew into the tree that now marks his grave. None of these songs is especially long, with only two stretching towards the four minute mark, and that is what they give them impact.

"Dance With Me To The Edge Of The World" is based on Rathlin Island, the island between Ireland and the Scotland, and narrates a story of the Viking deception of a local chieftain whose daughter is then "danced off Fair Head" to her death. The pace slows with a guitar introduction for "Children of Lir", which delivers a message of faith in freedom from suffering, with a percussion and mandolin rhythm build to die for! This is probably my personal highlight song from the album.

"Captain's Song (Sorley Boy)" features the voice of John Prine, and tracks back to the sixteenth century with a tale about a notorious local chieftain Sorley Boy MacDonnell and concludes with a rousing 'tooralala', before giving way to the mandolin intro to the beautiful "Isabella", with its traditional slow country blues rhythm and powerful vocal accompaniment.

"St. Patrick on Slemish Mountain" gives the album a lift with its increased pace with a tale of St. Patrick finding his faith among the herds and flocks he was shepherding. It's a real foot-tapper, and the listener is brought back to earth with the church organ gentleness of all 41 seconds of "Bessie's Hymn". "Fair Head's Daughter" is the reprise of the story of the title track, with a true singalong feel to it. The Orphan Brigade are adept at producing earworms, and the song is followed by the song reprise fronted by Seaview Primary School, Glenarm.

Legend tells us that Julia McQuillan was the "Black Nun", who wished to be buried at the entrance to the chapel at Bonamargy Friary so that she might be trodden under the feet of those who entered. "Mind the Road" is a fitting song to conclude any album, with a gorgeous mix of a full sounding acoustic guitar, textural mandolin and double bass backing some of this work's finest lead vocals.

This is an album that requires a number of listens not because of challenging rhythms, obtuse lyrics or anything complex like that, but because there is so much going on instrumentally, and so many stories to understand. The songs are never cluttered. They just deserve proper attention. In short, this versatile album is fabulous. The song writing and interpretation of the folk tales the songs represent is exceptional and it is delivered with a swagger and a smile.