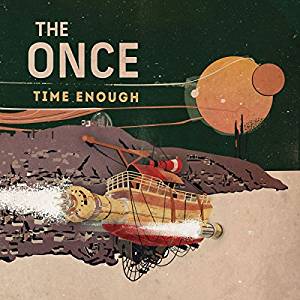 
Time Enough is the fourth studio album from Newfoundland trio, The Once. Over the last decade The Once have chalked up nominations and wins at the JUNO Awards, the East Coast Music Awards, and the Canadian Folk Awards, so this is a band with pedigree. The new album features some of the most vulnerable and honest material of their career, while staying true to their roots with harmony driven songs.

One of the key strengths is in evidence on the opening track and first single, I Can't Live Without You. Geraldine Hollett's delicate vocals infuse the track with a 70s vibe, reminiscent of Fleetwood Mac and Carly Simon, aided by the supportive voices of Phil Churchill and Andrew Dale. Before The Fall has a little added grit to it, and a slightly more modern feel, with a nostalgic sense of loss but also a note of hope for the future. Covering self-image issues and accepting one's past in the opening two songs, you can see that this is an album of reflection, a theme which pops up throughout the record.

The highlight arguably comes at around the halfway point with the wonderfully harmonic Another Morning. The vocal performances have a real gentle power to them, and together with the melody makes this an uplifting and moving listen. We Look Back is a delightful track too, with a touch of Aimee Mann to the vocals, full of warmth that can't help but put a smile on your face. The album closes with Some Lies, written by Tim Baker, a song with an emotional wallop which still manages to feel oddly comforting.

By the end you'll be itching to listen again, and it's an album that just gets better with each spin. The harmonies wash over you all warm and comfortable, but subsequent listens reveals the true emotional depths of the lyrics. That makes Time Enough a beautiful and engaging experience that you will find yourself returning to again and again

I Can't Live Without You