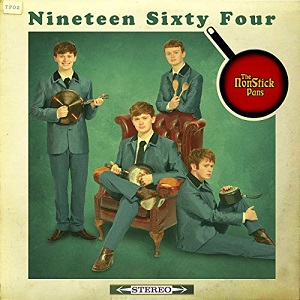 
Nostalgia isn't what it used to be, so now's the perfect time to release a 1960's concept album, right? The NonStick Pans is a fictional band created by the actor Pete Rugman, and if the album cover is to believe, this band is populated by his clones. There's not much of an online presence for the band besides social media accounts and some YouTube music videos, but the music can more than speak for itself.

The album kicks off in spectacular fashion, and doesn't let up through the first few songs. To Cast A Shadow In The Dark is a wonderful statement of intent, with a layered sound heavily inspired by the sixties as you'd expect. This isn't some easy Beatles rip off though. As with the rest of the songs, there's parts that are influenced by each of the last six decades. Somehow Girl has a touch of the Beach Boys about it, while Never Built To Last feels hewn from the seventies. Pick of the tracks is probably Fading To Grey which is incredibly well put together, and is simply a very good song.

Sure, Nineteen Sixty Four is a concept album, but these songs haven't been thrown together with a clichéd sixties melody. They are well written, well crafted, and excellently performed. If you go into this expecting a retro throwback to a time when bowl-cut hair and flared trousers were all the rage, you're going to come out of it with so much more. This is proper music, full of joy but not afraid to take on the weightier themes. Hopefully Rugman carries on with his band of clones, and we'll get to enjoy much more from The NonStick Pans.