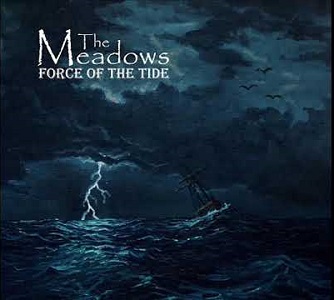 The Meadows
Album: Force Of The Tide
Label: Self Released
Tracks: 11
Website: http://www.themeadowsband.co.uk


The Meadows are a family band, in that tradition so often seen in folk music, where everyone is talented and they work together in a way that only people who have know each other all their lives can do. After a début EP in "Through The Fayre" in 2017 they've released their full début album. "Force Of The Tide" is a real folk album that presses all the right buttons; there are even two songs about pirates, in keeping with the nautical theme.

In "Henry Martin", a traditional Scottish tune, Henry becomes a pirate after winning a raffle but he seems to sink his first target before getting hold of the cargo. Fortunately the song has been reduced from the original version which had 62 verses. Later on in "High Barbary", another traditional sea song, the tables are turned, the pirate's ship demasted and the only quarter offered is to be sunk upon the sea. The temptation is normally to make pirate songs rollicking bellows but The Meadows bring a real control to both, as would be expected by classically trained musicians who have studied under an impressive list of tutors. The same is true of "Spanish Ladies" which has become a ballad rather than a shanty and the words take on a new meaning of leaving lovers behind which makes it rather touching. Unfortunately the album doesn't credit individual members of the band - Melody, Fantasia, Harvey & Titania - so it's not possible to say who sings on which songs or plays the instruments with any certainty but they're certainly a very tight outfit.

Also taking a different twist on a familiar story is "Maid In Bedlam" which tells the story of a woman held there after her man is sent to sea, although it has a happy ending when he returns to marry her.

The group are from Wales, so they include a Welsh language songs "Si Hei Lwli Mabi" which is a children's lullaby and very beautiful. Apparently this also has a maritime theme although the title doesn't mean anything. Accompanied on the piano the excellent harmonies stand out in this song .

Finally there are song tune sets as well and although they may be classically trained these are definitely fiddle, rather than violin, pieces. Bedd y Morwr / Hen Ferchantan are two old traditional tunes that starts simply on the fiddle before intruding pipes and bodhrán to lift the pace so it fairly bounces along. The same is true of "Heron On The Water", a session tune if ever there was one, which had my toes tapping immediately.

The Meadows have produced an excellent début album which, as I said earlier, presses all the right buttons and has all the elements that would allow them to play a full set whilst keeping the audience engaged. It's traditional folk that would be welcome at any club or festival across the country but they've also managed to put their own stamp on some very well know pieces with a fresh approach and willingness to experiment. The album is now available on their website and I really hope I get the chance to see them on the road one day.