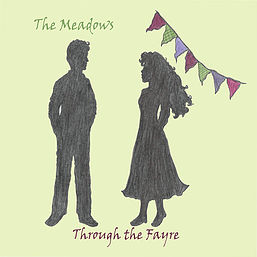 The Meadows
Album: Through The Fayre
Label: Self Released
Tracks: 5
Website: http://www.TheMeadowsBand.co.uk


Classically trained, The Meadows are a four piece multi-instrumental Celtic- Contemporary Folk band all drawn from the same family. 2017 was something of a break through year for them and as well as touring their self produced original show 'Celtic Journey' they appeared at numerous festivals, including Celtic Connections twice and this momentum has continued into 2018. Somewhere in all that they managed to find time to record this EP 'Through The Fayre' which is something of a precursor to their debut album out sometime soon.

The Meadows are a proper little cottage industry and the EP was recorded and produced by them at Pokey Cupboard Studios in Wales with Melody Meadows supplying flute, whistles and vocals, Fantasia Meadows, piano, violin and vocals, Harvey Meadows, violin, guitar, bodhran and vocals and Titania Meadows, vocals.

The five tracks here are all Trad.Arr by the band and will, I Imagine, all be familiar to the target audience.

Opening song 'Brigg Fair' enters on courtly piano before Titania Meadow's crystal clear vocal beautifully embroiders the melody as the track gradually builds with layered instrumentation and violin to the fore, until dropping out for a return to piano and voice to finish.

'She Moved Through The Fayre' is another showcase for The Meadows glorious voices and is underpinned by a subtle, reverbed guitar figure which lends a slightly menacing air to the proceedings and last song 'Star Of The County Down' ends the EP on a jaunty note, with strummed guitar and bodhran pushing things through under Harvey Meadows lead vocal.

For The Meadows I am sure this lovely little EP already serves as the perfect introduction or post gig purchase, and it feels like a great deal of care has been taken in the peformances to showcase both their individual and collective talents. Personally, I would have liked to hear one or two original or more contemporary folk songs, but equally it is an art form in itself to breathe new life into pieces that are such a part of the musical collective unconscious as those played here.

All in all, a fine calling card and 'Through The Fayre' certainly whets the appetite for things to come.