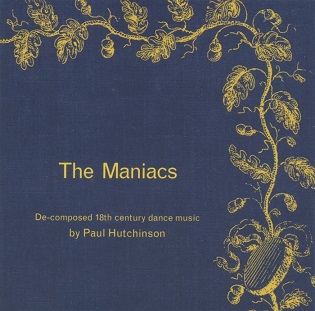 
The Maniacs, Paul Hutchinson accordion, Karen Winhurst clarinets, Seona Pritchard violin and viola, Gill Redmond cello, play traditional music, specifically on this album Country Dances from the late eighteenth and early nineteenth century. That is their starting point, but their sound draws on a English sounding music that straddles Folk, Classical and Jazz. "Admiral Mitchel's Reel" starts with a light and airy accordion that is joined by Karen's soaring clarinet. The overall feeling is of that pastoral abstract mood music that ECM records specialise in, that ethereal feel that sits between genre. "Hopeless Love" is a ruder, livelier dance with the strings, accordion and clarinet swirling around each other, there is a sense of dancing figures but there is also a freedom. This the bands' debut album was recorded in a one-day session in Shroton Church, hidden in the wilds of North Dorset. Some of that atmosphere and sense of space can be felt around the resonant cello and the freewheeling very jazzy clarinet on this stretched out exploration. "Roodulum" for all its eighteen century origins has a feel of the spry looping Penguin Café Orchestra, only this is dance music and that sense of movement flows through every note, even the way the instruments rise and fall suggests ducking and diving musicians moving around each other. "Sally Kelly" opens with the rich rumbles of cello and violin joined by the similarly resonant clarinet and accordion again there is a pleasure in listening to the instruments weave and wind around each other. General Suwarrow's Strathspey is another slow build where you can hear the instruments individually talk to each other and slowly twine together. The opening with the huge sounding clarinet and the plucked cello notes are a stripped back jazz delight while the accordion and violin follow a slow and slightly mournful dance. There is a strange sense of Philip Glass or Steve Reich minimalism in the quartet circular pulse in the middle of the piece.

Whether it is the stately dance music of "The Maniac-The Loon", the lively "Whiskers" or the altogether more eerie and sinister "Lovers Vows", dancing or nearly still, the music of The Maniacs holds your attention through gently shifting patterns rather than blowy showy flamboyance. The band's name celebrates their collective mania for dance music rather than any kind of rock n roll hedonism, although this is not slight mood music, or the tasteful but dry flutterings of a gazebo bound quartet in period costume accompanying the chink of glasses, this is music with life and depth.