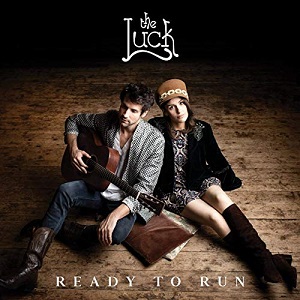 
Sibling singer songwriters Max and Esmay Luck have been making waves in the music scene for a few years now. Having played a great deal in the US, they were approached by the President of Music at Warner Brother Pictures, Paul Broucek, to produce their debut album. They already have over two million streams on Spotify, perform weekly concerts on Twitch, and were the headliner in the first Twitch festival in August. It's easy to see why Ready To Run has been so eagerly anticipated.

The album has an unashamedly pop feel to it with upbeat and infectious tracks throughout. It would perhaps be easy to dismiss this accordingly, but there is a lot of depth on display, and an impressive intermingling of country and folk elements into the music. While the opening tracks are radio-friendly crowd-pleasers, these are well crafted lyrically with raw emotion. It's easy to imagine songs like these blaring out of a festival stage to great acclaim.

While the quality never dips, the highlight comes with three successive songs late on. Place In The Sun is achingly gorgeous, stripped back and concentrating on Esmay's beautiful vocal performance. Vertigo is a return to the foot tappers that opened the album, and it has an irrepressible beat that just draws you in. It's the track that best highlights how well their voices can work together. A glance at Spotify shows that Holding On is the most streamed track (over 1.7 million when checked), and it's not hard to understand why. Like Place In The Sun, it's a little more stripped back compared with some of the other tracks, and has a fragile power that is captivating.

Clearly The Luck are a duo that are going places, and Ready To Run is the perfect showcase both of their notable talents and their exciting potential. The decision to leave London and head to LA was not without risk, but it's looking like an unbelievably wise choice. They seem poised for the big time, and on the strength of Ready To Run, I think they deserve to be there. This is a hugely enjoyable listen, and I look forward to hearing more from The Luck in the near future.