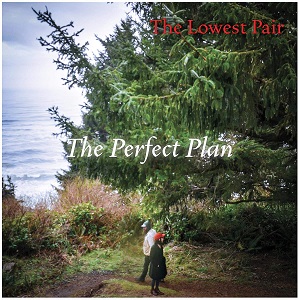 
An Olympia/Minneapolis claw-hammer banjo and guitar duo, their name taken from a poem by John Hartford, this is Kendl Winter and Palmer T. Lee's sixth album. Produced by Mike Mogis, who also plays pedal steel and mellotron and fleshed out with bass, keys, electric guitar, mandolin and percussion, they open, Kendl on warbling lead, with the simple acoustic guitar-backed five-minute love song ballad stunner 'How Far I Would Go', part inspired by Tom Robbins novel Jitterbug Perfume. Banjo makes its first fluttering appearance along with drums on the train-time rhythmic chug of 'Too Late Babe' and from there into the more Appalachian feel of 'Wild Animals' with its syncopated percussion, Lee intoning "Breathe in breathe out" behind Kendl's ghostly vocals. The longest track at nearly six minutes, 'Shot Down The Sky' is a slow, mandolin and steel-keening ruminative number about basically letting go rather than suffering under the pressure, the mood lightening with the banjo bubbling 'Castaway' which, on a similar note, observes that "what will be will be" and enjoy the moment.

Cast in a different musical framework, the shimmering 'Morning Light' has a more atmospheric, dawn mist feel to it, a song about learning the wisdom of how to love and life that sports the wry line "there's no hind in sight".

As the title suggests, 'We Are Bleeding', initially sung a capella before the banjo sets in and the pace gathers, ebbs and flows, is essentially about seeing the bigger picture when we are focused on our own hurts. Finally, Lee gets to take lead on the acoustic fingerpicked and mandolin coloured 'Enemy of Ease', reflecting on how holding on to the past prevents you from moving forward as he sings "May your mouth be removed from my mind before long".

They close with, first, the pedal steel and mellotron flavours of the slow waltz country relationships hymnal 'Take What You Can Get' with its glorious swayalong chorus, and, finally, the title track, an airy, circling fingerpicked guitar pattern intro creating he mood before Kendl sings "Just because it didn't go the way we planned/doesn't mean it didn't go how it was meant to be", but that's no reason to give up on a relationship because "we get eternity to figure out where we went wrong" so today is the time for learning and, echoing the rehab mantra, serenity, courage and wisdom and realise that, however troubled the night, the sun always rises. Absolutely pairfect.