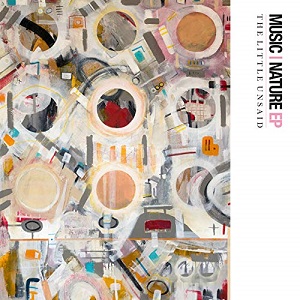 After signing with 'Reveal Records' in 2019, they released 'Atomise' as their first full length album on the label and barely four months later it is followed up with this six track EP 'Music | Nature', five songs of which were recorded during the 'Atomise' sessions.

Opening track 'Music' swirls in on dreamy synth, keys and sharp drums with John Elliott's deceptively light vocal encouraging the listener to break free of societies constraints and barriers as he tells us "I've got my music, don't need my head screwed on".

'Nature' is another strongly rhythmic piece with particularly fine drums and bass to the fore that lyrically explores the ensuing relationship between humanity and the natural world, should the destruction caused ever be honestly acknowledged.

'Floodlight' is almost anthemic in its bleakness as it immerses itself in loneliness, isolation and the past to a sound track that layers and builds in a way that conjures up images of 10CC's 'I'm Not In Love', 'Solstice' is a beautiful, spare song with the emotive vocal to the fore, 'Milltown' looks back on a small northern town childhood over a lovely, rolling, recursive piano figure and long time live favourite '(A Sweet Kind Of) Hurt' draws the record to a close with subtly picked guitar, simple percussion and strong vocal.

I have seen 'The Little Unsaid' several times live over the past two or three years and they really are one of those bands that almost hypnotically pull you into their world of music, in the same way I find acts like The Blue Nile and Elbow do. It really is a case of 'the whole being greater than the sum of the parts' and it's no different with this EP.

Always interesting, challenging and engaging in equal measures, this EP is another fine release from 'The Little Unsaid'.

(A Sweet Kind Of) Hurt