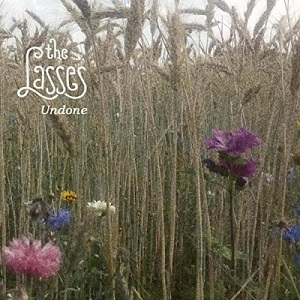 
I've been following the musical adventures of this Amsterdam-based female duo for a few years now, ever since I was introduced to their second album, Daughters (2015), and then later their live album with Kathryn Claire. They appear to have adopted slightly different surnames since then, for the credits in Undone now refer to them as Margot Merah and Sophie Janna, but their smoothly confident and undeniably accomplished voices are pretty unmistakable if you ever heard any of their earlier albums. But suffice to say, Undone finds them at a vocal peak, one of tremendous assurance within an unaffected delivery that's equally undemonstrative and unshowy - for they wear their gift very lightly. The story goes that the ladies met at an Irish session in their hometown, and soon discovered a common love for the traditional songs of Britain and Ireland, while at the same time finding that their distinctively different voices blended and harmonised uncannily when singing together.

Even so, subsequent album releases have seen a shift away from the traditional song bias towards quality contemporary writing, including a small handful of their own compositions. Indeed, the latter have turned out quite some notches above the "competent and promising" bracket of the novice songwriter, and on Undone two out of the three self-penned songs (Margot's Hunter Moon and Sophie's Here Now) are among my personal highlights. Of the songs by other writers, Jack Durtnall's The Tide is a standout, blessed with a minimal backing (it's also one of the pair of tracks to feature the magnificent French horn playing of guest Morris Kliphuis from the Amsterdam jazz scene), while elsewhere Natalie Merchant's anthem Motherland is an inspired choice. They also turn in characterful a cappella accounts of the early David Francey song Torn Screen Door and Ola Belle Reed's very-much-traditional-sounding Undone In Sorrow (which opens the album). The three "real" traditional songs are clustered together at the heart of the disc, and form a well-contrasted set, taking in the minor Child ballad Bonnie George Campbell, the lively Tipping It Up To Nancy and the Appalachian song The Blackest Crow.

I admit to having just a couple of small reservations - the unusual, irregular tumbling rhythm the Lasses employ on Who Knows Where The Time Goes? takes some getting used to (well managed though it is - and the French horn playing is outstanding on this track too); and there's an unexpected (and illogical) misreading of the final word in the first line of the chorus of Si Kahn's What You Do With What You've Got. But these should not spoil your enjoyment of a pretty excellent record, which throughout contains abundantly fine singing and harmonies to die for.

I've praised the minimal backing of the album as a whole, where the Lasses' own guitars and occasional bodhrán are gently supported, variously and as required, by violin, dobro, piano, mandolin, electric and acoustic guitars and bass. Individual lines are crisply delineated, reinforcing the refreshingly intimate single-miked recording by producer Janos Koolen which lovingly achieves the Lasses' intention that "when you listen, you feel like you are there with us, that we play and sing for you". Indeed. And the package artwork and design are perfectly lovely too.