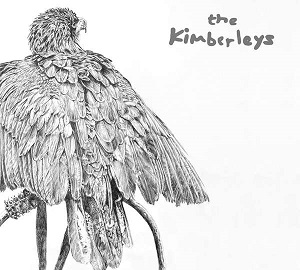 
Every now and then, along comes a release which is a debut yet familiar and this CD is very much a case in point. As Bruise, Isobel and Jim Kimberley have justly gained a reputation for genre defying performances which couple intelligent and thought provoking lyrics with top notch musicianship to produce a unique sound and memorable live performances that saw them just as at home in folk clubs as they were on the road with Hawkwind.

For their latest project, Isobel and Jim have decided to focus on the Folk side of their repertoire and this CD, the first to be released under The Kimberleys name, is a collection of traditional and original songs including an adaption of a WB Yeats poem and a song by Austin Marshall.

The album opens with Isobel taking the lead on the duo's version of the traditional Tyneside tale of that well known Geordie Alewife, Elsie Marley. On first listen, the substitution of the word honey for hinny seems slightly incongruous but given that the Geordie term of endearment is derived from the former word, it's inclusion actually makes perfect sense, especially when taken in context with the duo's more contemporary arrangement of this song.

The second track on the album gives us a chance to enjoy Jim Kimberley's vocal talents when he takes centre stage for Sally Gardens. The arrangement of predominantly Jim's voice backed by a Shruti Box with harp interludes perfectly suits the words of WB Yeats' poem, emphasising the feelings of melancholy and regret at lost love

The next track is an amalgam of two songs, one from Northern Ireland, the other from the North East of England. The Doffin Mistress originates in the Belfast linen mills and tells of someone who perhaps should be in every work place, a supervisor who is popular and stands up for the workers under her. Broom Bezzums has the feel of a street hawker's cry and I can well imagine it being sung on the streets of Newcastle to sell new brooms. The Kimberley's arrangement of these songs melds them together seamlessly and gives the resulting track an all together more epic feel, which sits as a pleasant counterpoint to the sparse simplicity that precedes it

The fourth track is a traditional tale of a battle with the devil. Sung here as The Smart Schoolboy, but also known as The False Knight On The Road, the story of the boy's battle and ultimate victory over Old Nick are well known and there are probably as many versions of this song as there are singers but, to me, this rendition has a slightly unfinished feel with The Prince Of Darkness' banishment coming rather sooner than expected. Having said that, this is still one of the best versions of the song that I have heard in a long time.

For track five, Isobel and Jim have chosen to record another well known traditional song. Pleasant And Delightful is one of those classic songs that can be heard in folk clubs across these islands on a regular basis and has become a part of the DNA of English Folk Music, Pleasant And Delightful is one of those songs that almost everybody knows but again this duo's arrangement captures the feel of the summer and the heartbreak of the lover's impending separation.

The penultimate track on this album is one which sees this duo following in the footsteps of a whole host of performers, including the likes of Fairport Convention and The Imagined Village. The Kimberleys' version of Tam Lin effortlessly conveys the drama as the story unfolds, not only through the words but also using the music to give a feel for the emotion and tension as the Janet and Tam Lim plan his escape from the Faerie realm and prepare to deal with the wrath of the Faerie Queen.

For me, the best track on the album is left to last. The Whitsun Dance is Austin Marshall's tribute to the widows of the Great War who, once the conflict was over, joined their local Morris sides to replace the men who would never return and to keep the tradition alive. The lilting waltz of the tune gives this song a feel that evokes the dancers and the sunshine of the late spring holiday of the title while the words serve to remind us how, while time marches on, the young men who went to war but never returned remain forever young but will never don their Bells and Baldricks again.

As Bruise, Isobel and Jim Kimberley justly gained a reputation for intelligent lyrics coupled with excellent musicianship and high production values, qualities that have been transferred over into their first recorded foray into the world of traditional music. Isobel and Jim have worked their magic to give a new freshness to some already well known songs and produce a recording that their existing fans will enjoy and will no doubt gain them some new ones as well. The Kimberleys promises to be one of the albums of 2018, my words can only hint at it's contents so grab yourselves a copy and find out just how good it is.