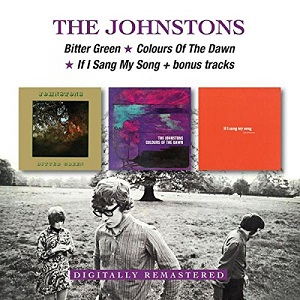 
The Johnstons were one of Ireland’s most influential and successful folk groups, the brand name lasting almost a decade, from the early-mid-’60s through to 1973. The band’s career began in the early ’60s as a family folk trio comprising Adrienne, Lucy and Michael, but after a couple of years they changed musical direction to embrace mostly contemporary material from American songwriters. Michael left the group and was replaced by Paul Brady and Mick Moloney, and over the next three years the focus gradually shifted to being something of a proving ground for Paul’s original songs.

By the time of the group’s fourth album, 1969’s Bitter Green, Lucy had departed, leaving The Johnstons a trio (Adrienne, Paul and Mick), and a small handful of session musicians were engaged to provide specific instrumental colours. Bitter Green was among the most wide-ranging of the group’s albums in terms of repertoire, with covers of songs by Ewan MacColl, Gordon Lightfoot, Leonard Cohen and Joni Mitchell (and John Conolly) and some traditional material, and the arrangements were at times quite experimental and much of their time. The trio’s next album, 1971’s Colours Of The Dawn, saw a sea-change towards contemporary writing encompassing political and social commentary, with the ascendancy of producer Chris McCloud (Adrienne’s future husband) as a major contributor and songwriter, and this shift precipitated Mick’s departure. But musically, the album was a strong collection, with Mick excelling on covers of Peggy Seeger’s Hello Friend and Ian Campbell’s The Old Man’s Tale and the first fruits of Paul’s writing skills, notably Brightness She Came and the title track, as well as the by-now-half-expected Cohen and Lightfoot covers.

The final album to be released under The Johnstons name (which by then meant just Adrienne and Paul) was 1972’s If I Sang My Song, here making its first ever complete appearance on CD – and not before time, for it’s a fine (albeit slightly disparate) collection of original songs ranging from ballads and romantic travelogues to angry anthems and commentaries, via two particularly fine Paul Brady songs (Border Child and December Windows). These were couched in the solid-state folk-rock mode of the day, featuring Rick Kemp on bass, a number of redoubtable session musicians, and even a string section. The duo, having relocated to the US, then made further conscious attempts to break into the American market, but to no avail, and the writing was on the wall when Paul accepted an invitation to join Planxty, so the Johnstons were no more after 1973.

This two-disc set now completes the reissue of all of the material recorded by The Johnstons for Transatlantic. BGO’s companion set presents the first three albums, and the gaps are now neatly filled by the collection of 13 bonus tracks appended to the second disc of this latest set. These take in the mid-to-late-’60s non-album singles, a couple of fairly anodyne covers that appeared on US issues of the albums, an over-produced take on Streets Of London, and finally two decent tracks cut at the final album sessions but again not included on the UK release. The booklet essay is exemplary, and the remastered sound a credit. Taken together, the four BGO discs containing (virtually) “the complete Johnstons” provides a salutary reminder of what booklet essay writer John O’Regan calls their “continued underestimation” in highlighting the need for revival and reappraisal of their work, for not only did the group possess taste, discernment and musicality – and a good eye for quality songs – but they were also capable of doing justice to both traditional and contemporary material. In the words of Mr. O’Regan, the set “makes a comprehensive case in favour of The Johnstons’ rightful place at the front of the Irish folk canon”.

The Curragh Of Kildare