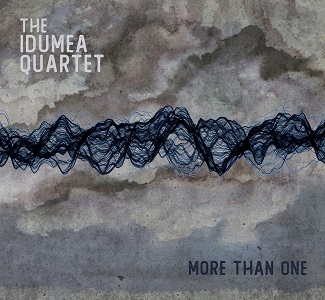 
As debut albums go, More Than One stands out as managing to achieve the seemingly impossible, by sounding both refreshingly original and traditional at one and the same time.

Using a classical string quartet format of two violin players, a viola player and a cellist, Nathan Bontrager, Ewan Macdonald, Jane Rotherfield and Rebecca (Becka) Wolfe share a common background in traditional music whilst, in their own words 'The Idumea Quartet' deconstruct and reassemble Appalachian folk music'. Indeed this sense of history is reflected in the very name of the group itself. Whilst Idumea is the Latin name for the land of the Edomites, and such illustrious artists as The Watersons, Young Tradition and Lady Maisery have all used the word as titles, the name derives from song number 47b in the Sacred Harp text, an important source of early American traditional music, originating in New England.

All tracks on the release are arranged by the group, and whilst the majority are trad. arr, Jane contributes two or three herself. The range of influences from other genres is also very apparent, resulting in an eclectic-sounding collection which will maintain the listener's attention throughout.

Opener, the instrumental Falls Of Richmond/Grub Springs, staples of the Old Time repertoire, gets the CD off to a rousing start, with the latter employing a technique known as "polytonality", toe-tapping inducing in the extreme. Other instrumental tracks include Jane's Carthy Hoose and album closer Sullivan's Hollow, a Mississippi fiddle tune which, following a visit to the Isle of Skye, takes on a highland colour. With Jane's Sports Are Sports, however, a tune guaranteed to put a smile on your face, her compositional talents really do come to the fore

A haunting delivery of Silver Dagger, popularised by Joan Baez, is mesmorising, the crystal clear vocals and melancholic strings combining effortlessly, whilst the 'vocal tune' Fall On my Knees exemplifies the depth and range of the group's repertoire and skills, just don't expect a Old Crow Medicine Show-lite interpetation. Cluck Old Hen, a brooding, mournful Old Time song, set here in a minor key, is an appropriate elegy to a soon-to-be-departed hen, further enhanced by a contemporary tune from Andy Letcher.

And Am I Born to Die? could be considered the centrepiece of the album, coming in at nigh on seven minutes. With the text drawn from a hymn by Charles Wesley first published in 1763, a version of which appears in the above-mentioned Sacred Harp, the melody being the source of the group's name, this a truly intense song

Shape note or Sacred Harp singing clearly has many inherent technicalities, and the extensive sleeve notes go a long way to providing explanations, these will be especially pleasing for those who wish to glean more of the musical theory behind the music.

One of the group's avowed aims is to seek to bring traditional repertoire into conversation with a chamber music aesthetic. Whilst this concept may seem far-fetched or contrived, it works admirably.

The Idumea Quartet provide a refreshing, rewarding listening experience. It is to be hoped that the future will, indeed, see More Than One.