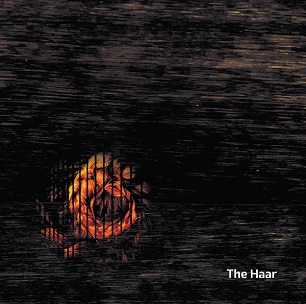 
The Haar, a new Anglo-Irish quartet that take their name from the sea-mist that fleetingly rolls in from the Irish and North Seas, the four-piece lines up as Fatea's instrumentalist of the year, Cormac Byrne on bodhrÃ¡n and percussion, fiddler Adam Summerhayes, producer Murray Grainger on accordion and, discovered singing unaccompanied during the Craiceann BodhrÃ¡n Summerschool in Inisheer, Molly Donnery on vocals.

Like the mist, their sound is enigmatic and ethereal, shifting from dense soundscapes to light wisps on a collection of nine traditional Irish songs, bringing new dimensions to familiar tunes.They begin with a sparse, haunting version of 'The King's Shilling' that sound like it was recorded at some secret faerie gathering, hollow bodhrÃ¡n and drone gathering as the track builds in intensity.

The distant rumble of muted percussion underpins an equally ethereal 'The Green Fields of Canada', again the sound adding further layers as the track proceeds, the tempo picking up for 'Willie Taylor' which opens unaccompanied with wordless vocals before fiddle and bodhrÃ¡n join Donnery as she recounts the familiar tale of a woman discovering her sailor lover's cheating on her with another and shooting them both dead, Summerhayes' fiddle rising to a nervy frenzy as the bloody deed approaches.

Popularised through Clanaad's recording, the eight-minute 'SiÃºil a RÃºn' swaps the navy for the military, the man's lover setting off to follow him. The verses sung in English and the chorus in Gaelic, a form known as macronic, maintaining its almost narcotic tempo throughout, it's again a sparsely arranged, percussive ballad drone that casts a hypnotic spell. Another Irish folk evergreen arrives with 'My Lagan Love', once more a minimal, drone-like accompaniment throwing the vocals into relief.

First recorded in 1944 and telling of a coursing incident in County Tyrone, 'The Creggan White Hare' keeps the sonic landscape heady and dense, although the fiddle here has a more fluid flow reflecting the chase as the hare eludes the greyhounds. Even so, you can't help but feel that the album needs to vary the musical mood and atmosphere somewhat, so at this point they launch into the popular tale of soricide and revenge by fiddle strings, 'Two Sisters', Byrne lifting the rhythm as Donnery adopts a jaunty delivery defiantly in contrast to the narrative.

The second longest track, 'The Emigrant's Farewell' (the Irish broadside lament rather than the similarly titled Scottish one by Thomas Pringle) summons the Celtic mist with Donnely's pure yet earthy voice set against accordion drone, the collection ending with the mournfully yearning 'Craigie Hills', another emigrant ballad, this time from Ulster although, while it mentions Doorin Shore, the eponymous hills celebrated in the lyrics would seem to be entirely fictional, Donnery's vocals deepening towards the end alongside the fiddle flourish.

An impressive debut that's reaping deserved acclaim, especially given the clarity of the sound achieved at Under The Eaves studio by Murray Grainger and then mastered by the renowned Jon Astley, though next time round it would be good to hear them varying the pacing more and showing different sides of their clearly accomplished musical skills, catching the breeze more rather than just the haze of that mist.