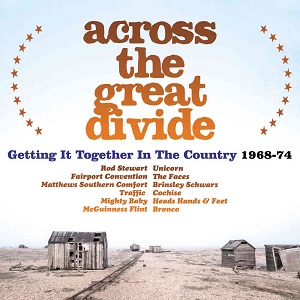 Various Artists
Album: Across The Great Divide - Getting It Together In The Country 1968-74
Label: Grapefruit
Tracks: 64
Website: http://www.cherryred.co.uk


The Grapefruit label has been producing a series of themed box sets that investigate the folk music scene of the late 1960s, early 1970s. Having tackled underground folk, female folk singers and folk rock; there has been a noticeable common link highlighting crosspollination of the music scenes on both sides of the Atlantic in that period. Their latest box set, 'Across The Great Divide', makes a nod in that direction by looking at the UK acts influenced by the American music scene including, as the compilation's sub-title suggests, those who retreated to rural areas to 'get it together'.

We could argue about who was first to head for a rural treat but Traffic were certainly feted as a band that benefitted from this. Here, their atmospheric 'Forty Thousand Headmen' shows how its languid, chilled out style became an influence on what we'd now term Americana. Whilst Rod Stewart may not have headed off to the country, it's his version of 'Country Comfort' that gets picked out. He wasn't aware at the time of recording that it was a composition from Elton John and Bernie Taupin (which appeared some time later on the former's 'Tumbleweed Connection' album) but its American influence is plain to hear. Stewart was less than enamoured with Faces 'Ooh La La' though the same influences are heard on what is now regarded as a classic from the pen of Ronnie Lane. The third album from Fairport Convention, 'Unhalfbricking', shows off American influences too. Not only does it contain three Dylan covers but also the up tempo, bluesy Richard Thompson composition, 'Cajun Woman' found on this compilation. This track's place in history being sealed as it was Dave Swarbrick's first contribution to Fairport Convention in what became one of their classic line ups.

Amongst the familiar tracks from the less well known, there is the Head, Hands and Feet classic, 'Warming Up The Band', with its little disguised homage to The Band complete with the guitar fireworks of Albert Lee. The Sutherland Brothers Band are represented by their first Island Records single to cause a stir before a string of other successes, 'The Pie'. It's the songwriting partnership of Benny Gallagher and Graham Lyle at work in McGuinness Flint for their hit, 'When I'm Dead And Gone' before the former duo head off for their own successful career.

The songs covered by others often give away the influences of the time with The Deep Set offering up a faithfully reproduction of Neil Young's 'Cinnamon Girl'. Shelagh McDonald also picks up 'Jesus Is Just Alright', a song made popular by the version recorded by The Byrds. Possibly, the most surprising cover contained here is The Hollies' recording of Doug Kershaw's Cajun classic 'Louisiana Man' which came about as Graham Nash left for America's West Coast and the group sought a fresh identity.

The above Hollies recording wasn't initially released and this compilation includes other material that has taken its time to surface. Matthews Southern Comfort are best known for their version of Joni Mitchell's 'Woodstock' though it's their 'Touch Her If You Can' track which is included here. A song covered from The Dillards, it got lost somewhere along the line. 'See How They Run' credited to Dave Cousins and Dave Lambert was also something of a lost treasure despite the pair working together in The Strawbs. Plainsong's cover of a gospel standard, 'I'll Fly Away', suffering a similar fate with both tracks rescued for this box set and the former as an a cappella demo.

As with Grapefruit's earlier box sets, there is a clam shell design with three CDs and around sixty tracks along with a substantial booklet giving the background to each track. The approach to compiling the selection here is also like before with big name artists, familiar songs from less known artists, obscure gems and a smattering of initially unreleased material. Whilst it's a compilation pitched at the music aficionado, everyone will find something of interest in this lovingly put together compilation.