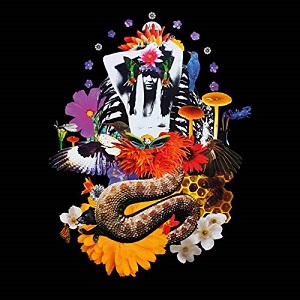 
The first thing that strikes you about "Tall Grass" is the crispness of the recording quality. Then the vocal layers kick in beneath the rugged Dylanesque lead vocal. For those of you buying the vinyl album, this review is structured in traditional album format, with an A and a B side. This is a clever, unusual album that at various times mixes its core traditional country fayre with blues, jazz rockabilly, doo-wop, psychedelia, and more than a hint of late 1940s feel good music. But before you decide that's all too much to take in, it's a blend that works. Don't expect convention, but do revel in this truly original work.

"Unwrap My Bones" darkly introduces the work, but the song lifts as it progresses with sprinklings of both lap steel guitar, mouthorgan and keyboards. This is the song I kept coming back to and is a great album opener. "Desert Flower" is at the other end of the scale and is essentially a doo-wop country pop song, with a smile in the voice, and a compelling singalong chorus.

"Main Street" has a chord structure and vocal arrangement not unlike something straight out of the Magical Mystery Tour, with terrific music supported with unashamed threads of psychedelia. It increases the intrigue, because this is a really well crafted album. On first listen you are not sure quite where it's going, with subsequent listens being packed with all the stuff you failed to hear first time around.

"Bright Lights and Deadbeats" is essentially a country ballad, beautifully unhurried, and almost slurring along its way, with dual vocals bouncing off each other and some great harmonies. "High Heel Blues is for me another highlight track which blends its country foundation with a banjo driven Rockabilly beat, and lap steel in support. A terrific, foot tapping song. The pace slows with "Keep On" with wonderfully languid jazz-blues acoustic guitar chords, and clever vocal harmonies that seem to alternate between country blues and almost the style of the Beverly Sisters. This is a track you warm to after a few listens.

"The Pulse" is a Wilco's style song, with gentle rhythms beneath striking, almost metallic lead vocal. Most of us will identify with lyrics about the break up of a relationship, and the repeated line "How am I supposed to go when you're alone, when I don't know what went wrong" will resonate with many. "Anyway Anyhow", a song about inevitability, brings us some more country jazz with vocal elements of 1940s feel good music. This is the song that persuaded me I have to see this band live one day soon.

The slower "Toss & Turn" is for me the album's highlight, a slow, country ballad in which lap steel and organ play off each other beautifully. "I Can't Fly" presents more country jazz with more terrific backing vocals. They are a real feature of this album and carry into "Ask For Alice".

"Don't Mind The Rain" brings the album to a close, starting with a sleezy, lazy blues feel, but soon developing as a strangely beautiful finale to this very good album. The band's own bio states "there's a hint of Gram, a sniff of Dylan, and a twist of Waylon's blues". You will get all of that and more.