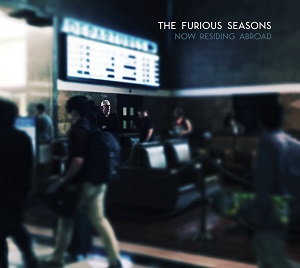 The Furious Seasons
Album: Now Residing Abroad
Label: Self Released
Tracks: 13
Website: http://www.thefuriousseasons.com
.On first impressions this Americana Californian trio have an incredibly full sound with many layers musically, though they operate on two guitars (one switching to electric and resonator) and a double bass. Minimal keyboards and slide are used beautifully to add further depth. Very quickly you are drawn to the depth of these songs.

Opener 'Expo Line' paints a very vivid and romantic picture of American city life. There is a definite feel of Springsteen in this opening track. Sticking firmly with the American first-person perspective lyric format, it could easily fall into being slightly one-dimensional but the song is written with enough imagery and poetry to keep you reaching for repeat.

'The Loyal Canadians' is a song written about the re-defining of identity in the age of Trump and becomes a stand-out track so far. Personally, I really like it when musicians are speaking out about these topics...the art of protest song is not over yet. The band have a definite sound of Americana but seem to pull it into different directions, often giving soaring choruses, giving a ballad-esque feel to certain songs.

One of the best examples so far is 'The Muse', having a very Californian 60s feel, The Byrds and Beach Boys coming to mind with soaring harmonies and lilting melodies.

The Furious Seasons are one of those rare delights, a group of musicians hitting their peak with intuitive chemistry, well-crafted songs and a feeling of ambition and togetherness captured together on an album.