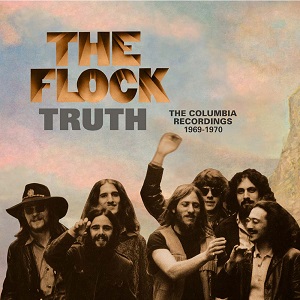 
The Flock was one of three seriously innovatory Chicago bands of the late 1960s who fused jazz and rock – the others being Blood Sweat & Tears and Chicago. The Flock, however, seem never to have received their due recognition in that context. Perhaps it’s because they differed from the other bands by taking in more classical leanings, whereas BS&T in particular leaned more towards soul and R&B? But a fresh listen to The Flock would seem to dispel that generalisation… Either way, the hotbed of talent within The Flock certainly made a great impression on John Mayall, who prominently endorsed the band on his sleeve note for its eponymous 1969 debut LP.

Like so many bands of their time, The Flock started out as a garage outfit (The Exclusives) playing covers, but after making four singles guitarist Fred Glickstein and sax player Rick Canoff and chums decided on a name change – having recently brought in extra sax and trumpet players – and at roughly the same time were introduced to the phenomenal classically trained violinist Jerry Goodman. This all came together in time for the band’s big break, the signing to Columbia Records (joining the aforementioned pair of Chicago bands on the roster). The resultant album, produced by CBS classical producer John McClure, delivered an extremely intelligent and satisfying mix of music that straddled the genres comfortably without alienating fans of any of them but stimulating further listener musical exploration. The musicians’ spontaneous creativity was brilliantly harnessed on this collection of mostly original pieces. Particularly impressive was the at-that-time-obligatory 15-minute epic, the title track, which began as a slow-drag 12-bar then graduated via a showy violin cadenza into a triumphant blazing brass and guitar workout before Goodman was again given his head to show off electric effects pedals and the whole ensemble descended into tumbling chaos. The tone-poem Introduction pointed the way towards album number two (Dinosaur Swamps). The flowing, multi-sectional Clown was another highlight, while Tired Of Waiting (the old Kinks hit) received an inspired cover (rather in the mould of the era’s general vogue for reworking pop hits in a prog/classical style – think Vanilla Fudge perhaps – but altogether more gutsy and funky). Also cut by The Flock around that time were a reworking of their earlier psych single What Would You Do If The Sun Died? and non-album track Lollipops And Rainbows; both are included here as bonus tracks, along with other “edits” that were released as singles during that period (and make their first appearance on CD).

The Flock’s lineup changed a little before the sessions for the second album, with John Gerber replacing Tom Webb and giving the band sound a subtly different (arguably less abrasive) complexion. The album artwork for Dinosaur Swamps, of course, was nothing if not iconic, and gave many fans a heady trip before the disc even made it to the turntable. But the music within was pretty spectacular too, every bit as complex musically as its predecessor but now trippy on an epic scale, taking the band out of the urban jungle into the wide-scape canyons and the country. Big Bird takes its cue from a fiddle hoedown, spurring a freewheeling flight of fancy before spiralling out of sight, while the feisty, brassy Crabfoot never seems to run out of steam over its eight-minute span, even when stopping in its tracks to let in a brief drum solo and some slightly pointless reverse-tape noodling. In another departure from the Flock norm, Mermaid turns out to be an oddball baroque-style chanson, but charming for all that. There’s the occasional artistic miscalculation (as on Hornschmeyer’s Island, where the beautiful lyrical passages are compromised by some unfortunate chipmunk-type vocal treatments), but by and large Dinosaur Swamps has some justification in being branded The Flock’s Sergeant Pepper (Glickstein’s words). The album was released in 1970, and while selling well didn’t really set the market on fire. As with many bands of the time, an excess of creative energy set the members off in different directions – but not before they managed (right at the end of 1970) to cut some tracks for a projected third album, to be called Flock Rock, which the label rejected as having too much emphasis on jamming. Fair comment, for in a way they don’t seem quite complete, although they do contain some marvellous playing (the overall looser feel and standard of rambling, free improvisation reminded me a lot of Zappa’s Hot Rats period) and show that The Flock was once again morphing into a different beast (and why not?). Four of these tracks surfaced on a 1993 Sony compilation of that name, and are included here as bonus tracks, along with both sides of a somewhat pointless 1970 single (Mermaid/Crabfoot) made up of severely edited versions of those Dinosaur Swamps tracks.

Thereby completing the recorded legacy of The Flock for Columbia – from any viewpoint, something of an achievement and up there with the best the era had to offer in the arena of prog/rock/jazz/classical fusion (though even that tag doesn’t tell the whole story).