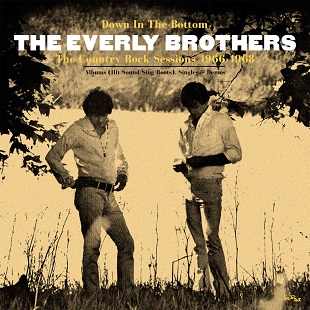 
This set may initially seem unpromising, since it presents Don and Phil literally Down In The Bottom. Not in the artistic sense, but at a career lowpoint - meaning a lean spell for commercial success between the falling-off of their chart successes in the mid-'60s and the emergence of a fully-realised country-rock approach with 1968's landmark Roots LP. Roots itself, with a clutch of contemporaneous session tracks, forms the third CD of this handsome package, which chronicles the buildup to that album's release as the Brothers sought to update their sound while not compromising their signature harmony-based style.

During the period from November 1966 to November 1968, they recorded mostly in Los Angeles rather than Nashville, and the first fruit of this new practice was The Hit Sound Of The Everly Brothers, an honest-to-goodness collection of covers of country, R&B and rock'n'roll hits that actually sounds better than it sounds (if you get my drift). Don and Phil are backed by the cream of the LA session crew including Glen Campbell, Larry Knechtel, Ray Pohlman and Hal Blaine, and there's a certain enterprise in the choice of material (whether inspired ideas from album producer Dick Glasser or a blatant indication of the Everlys' uncertainty over their musical direction). Some tracks get to really rock (albeit much in the approved mid-decade vein), while others hint at a possible future course. There's a pair of Don Gibson covers, one Hank Snow, a brooding workout of House Of The Rising Sun (amusingly, credited to Alan Price!), two Ray Charles (including Let's Go Get Stoned), Buddy Holly (Oh Boy), topped up with a recently penned Levine/Sheppard song The Devil's Child, and even a Jimmy Webb number (She Never Smiles Anymore) that sports an understated part-orchestrated arrangement. But in truth no track is less than respectable and most are actually pretty good for their time - if slightly out of step with that time by the time the album appeared in 1967 and the music scene was moving on apace. The first CD here presents the entire album together with five more tracks recorded either at the album sessions or later in April 1967; most of these tracks didn't surface until the 1990s Rhino Everlys anthology, so it's useful to have them available again here. The last of these is a gentle acoustic demo for the Everlys' mid-'67 chart entry, the sunshine-pop Bowling Green, a more consciously orchestrated version of which was to spearhead The Hit Sound's followup LP, Sing.

Sing can be heard to continue the indecisiveness in terms of musical direction, where Don and Phil were both absorbing and reflecting back the musical developments of the era - if inevitably in a reactive manner. They were not cutting-edge enough to be bracketed with their label Warner Brothers' trendy "Youthquake" bandwagon, so they tended to lose out on the promotion opportunities, falling between the stools with their accomplished brand of pop and proto-flower-power or nascent psychedelia. Anyone who was into the likes of the Beach Boys, The Association or Harpers Bizarre, say, would have found plenty to like in the Everlys' take on contemporary pop. There was no disgrace in the Everly's performances, and they demonstrated their vocal prowess was no mismatch for the material. And no embarrassment in cuts like Talking To The Flowers, which could so easily have signalled a credibility gap but instead should have convinced radio programmers of Don and Phil's potential in a rapidly changing market. Two of the LP's tracks (It's All Over and Somebody Help Me) revisited cuts from previous albums, while the biggest surprise of all was an unexpectedly creditable take on the year's iconic chart-topper A Whiter Shade Of Pale. So this present set's second disc gives us the whole of the Sing LP plus nine bonus tracks that were either recorded at the same time or specially as singles (including the archetypal Love Of The Common People). These include some (It's My Time, Empty Boxes) that remind me of Simon & Garfunkel in their Bookends period.

The "revitalisation" (in terms of "cool", that is) of the Everlys was next on the agenda, and in early 1968 new WB producer Lenny Waronker was given the task. A series of sessions produced some interestingly experimental sides including the strange eastern-tinged Lord Of The Manor, covers of Neil Young's Mr. Soul and one of that year's biggest country hits Curly Putman's My Elusive Dreams, the brothers' own composition Love With Your Heart (here in two radically different guises, the second of which is decidedly peculiar), and a version of Dolly Parton's In The Good Old Days; most of these cuts remained in the vaults for some years - unfairly so, IMHO. But it was with the piecemeal sessions for the LP that was to become Roots that a cohesive theme began to crystallise - that of Don and Phil paying homage to their country roots with songs from the pens of approved pioneer country artists like Jimmie Rodgers, Merle Haggard, Ray Price and George Jones, and a new take on staple Shady Grove, alongside a more contemporary slant on proceedings via songs by Randy Newman, Ron Elliott and Terry Slater. The LP was even bookended by ancient (1952) soundbites from Everly family archives. The new treatments were innovative and often much in the mould of the Byrds or more especially the Burritos; some songs, like Ron Elliott's Ventura Boulevard and Turn Around, also Living Too Close To The Ground (penned by Don with his wife Venetia), employed a deft string section to good effect. The two Merle Haggard songs (Mama Tried and Sing Me Back Home) were IMHO particularly nicely done. And of course the trademark Everlys harmonies brought the songs full circle and complemented the rockier touches. The wildest card of the entire album was a wacky street-band take on the George Jones & Ray Price number You Done Me Wrong. The LP also contained a wonderfully delicate reimagining of I Wonder If I Care As Much, an Everly Brothers original the duo first recorded in March 1957 and formed the B-side to Bye Bye Love! For Roots, a crack team of West Coast session musicians similar to that used on The Hit Sound was recruited, and they did a splendid job - but even this degree of excellence and polish didn't completely convince the record-buying public. In retrospect, of course, the album can be seen as more than the sum of its parts - as indeed can the generous collection of bonus cuts that conclude this three-disc set.

So, for those seeking to reappraise the "doldrum years" of the Everlys' career, this set provides an ideal opportunity. Probably against expectations, there's plenty of superb and under-appreciated music here richly deserving of reassessment.