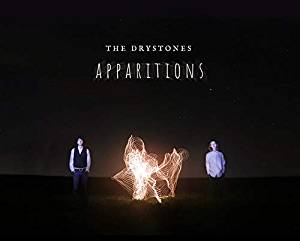 
2018 Radio Two young folk awards nominees The Drystones, Alex Gardner and Ford Collier, between them play a bewildering array of instruments. Its what they do with that armory that makes Apparitions special. Like a 21st Century Incredible String Band the duo blends together ancient and modern in a way that sounds alive and vital rather than consciously envelope pushing. 'Oscar's Ghost', a pondering of MacPherson's 'collected' tales of Ossian, opens with Alex's masterful folk rock fiddle, sweeping in like film music. Impeccably played and placed guitars and percussion build the scene with just a touch of studio sparkle. Fine vocals tell the story on this atmospheric opener. 'Dean' mixes acoustic and electronic percussion and grimy keyboards behind some nimble fiddle and guitar. There is a touch of The Afro Celts in the way time is bent and ancient and modern blended. Looped and sampled news open 'Roll Up' / 'The Story', as the present is referenced in folk songs for the future. The beautiful soaring fiddle, the spritely tune and sweet sweet harmonies put me very much in mind of the superb and much missed Whippersnapper on another strong performance.

'Nonesuch' is a dance arrangement of a set of Playford's 17th century tune, but from the 'eavy rock fret work, to the electronics, delayed fiddle and pulsing beat, very much fed through The Drystones mill. To dispel any feeling of pedalheadness 'Losing Your Way' is a perfectly played duo instrumental. 'Jack Crook' has the sweet vocal harmonising and fiddle of Chris Leslie era Fairport Convention or Whippersnapper, shot through with inventive percussion. Considerable musical chops are demonstrated on the Celtic instrumental 'Breathless' and the looser 'Rule of Three' with incredible interplay between the whistles and fiddle and once again sparkling percussion. Closer 'Rain' is an energetic burst of an instrumental sprinkled with weather forecast samples and atmospherics.

This is an absolute jewel of an album, pushing and growing the classic folk duo form, intimate, polished, sparkling, with beauty and fine detail there for the listener.