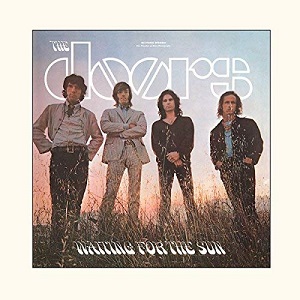 
Continuing the Rhino anniversary series of remastered and expanded reissues of The Doors’ albums, the label is now commemorating the 50th anniversary of album number three, Waiting For The Sun, wherein the epic studio journeys of The End and When The Music’s Over gave way – on record, at least – to a more controlled sense of structural invention, also a more varied musical climate that embraced psychedelia and occasional lyricism in place of the strident, harder-edged blues-rock of much of the band’s debut – a process that had begun with the weirder moments of album two (Strange Days). On Waiting For The Sun, the final track, Five To One, retained the tough, riff-heavy demeanour of the band’s live act, but there was also commercial pop (Hello I Love You and We Could Be So Good Together), jaunty singalong (Love Street), soft ballads (Yes The River Knows and the dreamy Summer’s Almost Gone), classical-influenced psych (Spanish Caravan, which borrowed its theme from Albéniz), swirling pop-baroque (Wintertime Love), weird tribal handclapped a cappella (My Wild Love), agit-protest (The Unknown Soldier, now sounding very much zeitgeist), and as centrepiece Not To Touch The Earth (the only portion of unfinished live highlight Celebration Of The Lizard to survive transition to album).

This 50th Anniversary Deluxe Edition comes in 2-CD/1-Vinyl-LP format. It includes a newly remastered version (by the album’s original producer Bruce Botznick) of the original album, plus a second CD comprising 14 hitherto unreleased tracks discovered in the archive by Botznick. Nine of them are rough mixes, from the album sessions, of all the LP’s songs except for We Could Be… and The Unknown Soldier). These vary in interest, even though Botznick is quoted as preferring some of these to the finished versions – I can hear what he means in a certain element of raw energy that surfaces at times, and there are some different sensibilities on individual balances too. The remaining five unreleased cuts were recorded live in concert in Copenhagen on 17th September 1968; these take three songs from the album – Hello I Love You, Five To One and The Unknown Soldier – together with then-non-album opus The WASP and first-album classic Back Door Man. There’s plenty of fire here, and one kinda wishes the recording of the rest of the concert also existed.

Intriguingly, though, this 50th Anniversary Edition of Waiting For The Sun differs from its (single-disc) 40th Anniversary predecessor by omitting the latter’s bonus material (which comprised the aforementioned Celebration Of The Lizard plus three alternate takes of Not To Touch The Earth and a distinct curiosity, an account of Albinoni’s Adagio). However, given the ungenerous playing time of the two CDs (32 and 42 minutes respectively), it would’ve been a simple matter to include these bonus tracks for completeness rather than make fans pay all over again for a new edition which by rights ought to be the most complete and definitive. Otherwise, one can’t argue with the high standard of the presentation of this latest edition.

Waiting For The Sun