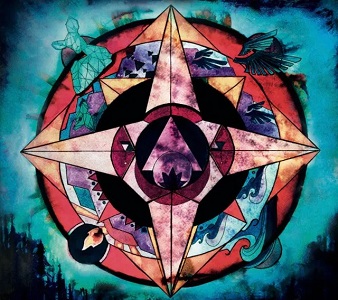 
Their first since 2016's Give and Receive, Nashville duo Dorothy Daniel and Ben DeBerry frame the album with tracks titled 'Shine' and 'Rain'; see what they did there. Marco Giovino in the producer's chair, it's evident from the opening that there's been a musical shift and that old bluegrassy sound has transitioned into something tougher and harder, the title cut being a steady bluesy stomp that calls to mind the snarly prowl of Neil Young's 'Ohio' on a song, drawing on gospel-like lyrics, about finding a way out of the darkness. Giovino providing puttering drums and vibes, 'Holding The Bag' is a musically lighter but still moody piece and again anchored on a lyrics about being abandoned ("standing in the middle of the pieces of a broken life") and left carrying the weight, leading into the loose limbed Southern bluesy guitar groove and clangy percussion of 'The Road', one of three co-writes with bluegrass songsmith star Joe Weisberger.

A multi-character confessional sung by Daniel in the voices of those left alone, including a child refugee, 'Francis' is a slower curl through blues and soul that has hints of Gillian Welch to it while on the walking beat and desert twang 'Never Gone' she adopts the persona of a selfish man seeking forgiveness based on a friend's father who, battling a chronic illness, broke his family's hearts by choosing to say goodbye on his own terms.

Initially sparse and spooked before gathering pace, 'The River Is Wide' provides the centrepiece, a song about the mental and emotional legacy of physical and psychological trauma and, once again, about finding a way to rise out of the darkness it brings. It's followed, in turn, by the funky rhythm title track, Darrel Scott providing harmonies behind Daniel's gospel-infused vocals as she sings about looking for something to hold on to and help climb life's steep path.

'Undertow' (a song about being brought down by a faithless lover, a hungry ghost) rides a tribal thump drum beat and a kind of swampy, bluesy Stevie Nicks groove before positivity shines its light with the mid-tempo crowd swayer 'Love Conquers War' ("teach the young to live without/Our fathers' sins"). There's more of a familiar twangsome country sound and chug to 'The Coals Glow', a narrative about a restless soul ("two eyes looking out from a runaway train") while another familiar musical note's struck on Maddie's Ghost ("she's just a good girl, in a bad world, doing bad things") except this time it's a Mark Knopfler guitar riff.

And so, they end with the fingerpicked 'Rain', DeBerry's vocals finally to the fire with his wife harmonising, the drums thumping and Duke Levine on mandolin as they sing "we all fall down" but "making a joyful sound". Shine on.