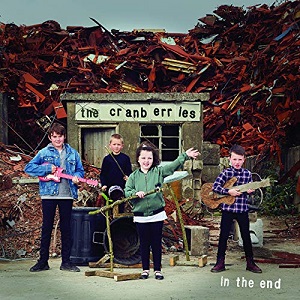 
My first experience of the Cranberries was the unexpected arrival of a 12" white label of "Uncertain" on an obscure Irish label Xeric, which subsequently turned out to be the name of the studios run by the band's then manager Pearse Gilmore. Back then Fatea was an A4 fanzine working mainly on the edge of the indie and post punk scenes with a reputation for giving new bands a chance.

A phoner was quickly set up for what was probably the band's first UK interview, whilst the band were just about to sign to Island there were already cracks appearing in their relationship with their manager and that brought a subsequent delay in the recording and releasing of the band's debut album 'Everyone Else Is Doing It So Why Can't We?', which again I was lucky enough to get an advance copy of and brought about a second interview. There was a real mood of expectation at the time Dolores O'Riordan was positively buzzing about the album. We knew it was going to do well, but I don't think any of us expected it to hit the very top.

The singles 'Linger', 'Dreams' and 'Zombies' fired the band into the public consciousness, but for me The Cranberries were a band that always seemed to be more about the albums, communicating a wider story than could be conveyed on singles and that argument would seem to be backed by the first four albums going top ten.

The mid-noughties saw the band taking a hiatus, but unexpectedly the band reformed in 2009 and got back into recording and touring before Dolores health problems, a severe back problem. saw their 2017 touring postponed and subsequently cancelled.

Following Dolores' tragic death in the January of 2018 it transpired that work had already begun on the band's new album. March saw The Cranberries announcing that the final album would be completed and that would be it, they weren't going to continue as a unit without Dolores.

Once again, I've been very lucky to have had an advance copy of that new album, 'In The End' and whilst Fatea has headed off in a different direction, this is one of those necessary exceptions, because there is such a spark that zips between the songs.

Both the title and the songs on 'In The End' seem apocryphal, listening to the album, you can't help be feel that it was always designed to be a swansong. It captures so much of what the Cranberries are an were.

What I mean by that is that is captures so many of the band's facets, the driving indie inflections that remind of 'Everyone Else Is Doing It So Why Can't We?' without being a pastiche. The title of that debut album, reminding us The Cranberries were always a band, albeit one that suffered the curse of many a female lead unit.

'In The End' is a classic Cranberries album, it's an album, rather than a collection of songs, it has a lot of autobiographical elements to it. There are elements of the band being laid bare, at times you can almost feel the strain, cut yourself on the raw edges.

That you know Dolores' won't be there to take her share of the plaudits is an elephant in the room on the first couple of listens, but that dissipates as you realise just how good an album it is that you are listening to, this is not just one of the best albums from The Cranberries, it's become one of my favourite albums of the year.

I find myself thinking that this is one of those albums that still lingers in the mind long after the final chord had faded and then wondering if that's a bit twee? Ultimately if you want to hear the final album of a band that is signing off whilst still at the top of their songwriting legacy, 'In The End' is that album and is an incredibly fitting memorial.