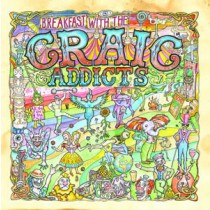 
This Sligo based trad/world outfit have been beavering away quietly this last couple of years ,their heady conconction of fusions marking them out as a band with something different to say. This new album throws down the gauntlet to accepted norms,combining ,as it does,traditional songs of the ilk of The Ballynure Ballad with Falco's Amadeus,which itself has Jenny's Chickens attached by towbar.Much more in between,and ,quelle surprise,for the most part,it works.

Kicking off with The Black Rogue jig set,which,like much of the album has a feel of Steeleye Span circa Ten Man Mop about it,it touches many genres along the way with great conviction.There is a consummate level of musical skill throughout,from Fionnuala Kennedy's banjo picking and singing on Wedding Dress to the wild,fiddle -driven feel of Stamena-courtesy of Claudia Schwab-that it would be both difficult and unfair to pick out a favourite piece.A minor cavil is the inclusion of Charlie Feathers' I Can't Hardly Stand It;it is totally out of whack with the rest of the album.

So,what of the Craic Addicts and this album?It is a fine piece of work which has engaged me almost daily for the past two weeks.Live,it seems,they are the cat's pajamas,and in Breakfast With…..they have created a work of worth and endurance which hints at more substantive things to come.All of the above,with a broad grin on its face to boot.

Breakfast With The Craic Addicts