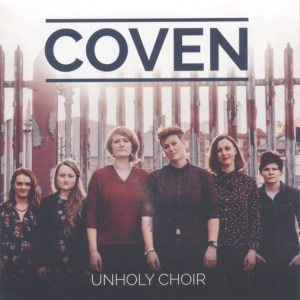 
Three years ago Belinda O'Hooley and Heidi Tidow teamed up with Lady Maisery, Maggi Roche and Grace Petrie to form Coven, a collective put together to perform a series of three concerts to celebrate International Women's Day. Since then the tour has grown to 13 dates and this year an accompanying EP featuring the five remaining members following the recent departure of Maggi Roche.

The Unholy Choir brings together six tracks that Coven has worked on in the past, all of which have a significance with regards to International Women's Day and are linked together by two main themes.

The first three tracks on The Unholy Choir all deal with struggle in one form or another, starting off with the track whose lyrics provide the EP's title. Coil And Spring was composed by Belinda, Heidi and Chumbawamba's Boff Whalley and deals with the now infamous protest against the Russian Orthodox Church by Russian Punk band Pussy Riot. From there we go back the early years of the 20th century and the struggle for equality in the workplace. Bread And Roses is a poem by James Oppenheim inspired by the 1912 textile strike in Lawrence, Massachusetts that has been set to music several times and has become a standard song in the labour movement. Here Rowan Rheingans has composed a new tune that ably complements Oppenheim's words, rising to a final crescendo that only serves to emphasise the message contained within the words. The third track on Unholy Choir is one that Lady Maisery have previously recorded. This Woman's work was written by Kate Bush and is perhaps the best known track from her album The Sensual World, once again the simple arrangement coupled with the effect of six voices in unison serves to emphasise the emotional impact of the song and it's tale of a difficult childbirth.

The last three tracks on The Unholy Choir all deal with a struggle of a different kind, that of being true to yourself and doing that which you feel to be right. The fourth track is one written by former Coven member Maggi Roche for her band The Roches. Quitting Time is a joyful ode to letting go and embracing your inner hippy. Track five is, for me, the standout track on the EP. There's A Fire In Your Heart is a Grace Petrie composition and it is only appropriate that she takes the lead on her song calling us all to activism and to do whatever we can for the causes in which we believe, no matter how small that action is. The sixth and final track is a very effective a Capella version of a Pat Humphries song. Never Turning Back is a song about always going forward on whatever journey you happen to find yourself on, Coven's version was recorded live with only a couple of mics and starts with just a single voice, adding and subtracting others as the song progresses with all members coming in on the chorus.

One of the things that the folk scene does exceedingly well is collaborative projects and Coven is certainly no exception in this regard. Unholy Choir is an excellent taster of this collective's live shows and also gives a useful insight into this group's raison d'etre. Something that I have seen in the press recently is the protest song is a dying genre, on the basis of this EP, it seems to me that it is alive and well and in very good hands.

The only downside to this EP is that is exclusively available at the dates on Coven's current tour. It is an excellent collection of songs and deserves to be heard by a wider audience. If you're lucky enough to be going to one of the gigs then make sure you get yours hands on a copy, this EP is a fitting snapshot of an extremely talented group of performers at their best.