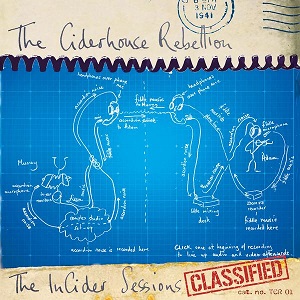 
On the face of it, in the age of apparent technological wizardry, and certainly given the current circumstances with the plethora of on-line shows and festivals that we have been privileged to enjoy, the feasibility of two musicians physically separated by 50 miles being able to create music spontaneously and record would not seem to be unreasonable. This is not, however, as simple as it may seem and it is precisely the problem that accordionist Murray Grainger, located in Lincolnshire, and fiddle player Adam Summerhayes, living in Derbyshire, recently encountered.

In order to successfully realise their project, the essence of which is music created by two musicians who need to be able to hear each other in real time, with no time lag, in order to symbiotically feed off the other as their music is created spontaneously in real time, this issue of latency, the time lag between creating the sound and the other person hearing it, both ways round, had to be resolved. In what appears to have been an ingenious, almost Heath Robinson, approach involving two land-line telephones , wires, mic'd earpieces, complex microphone set-ups and headphones wrapped in blanket, real-time musical connections were miraculously made, often of appalling sound quality for the protagonists, but sufficient to enable success for the duo to operate their preferred modus operandi.

Having proved the seemingly impossible was indeed possible, the pair embarked on a series of weekly video broadcasts, from the end of March to Mid-May, which contained a mix of tunes, poetry, banter and a talking chicken Jeremy Bird. It is from these episodes that the 12 tunes on this CD were taken, (with two exceptions, see below).

And how grateful we should be to them for their sterling efforts. The InCider Sessions CD is an absolute treat and a cornucopia of instrumental delights of the highest order.

For over an hour, the captivating music on the release, which includes an intoxicating mix of their takes on traditional tunes alongside pure improvisations, reaches beyond the mere realm of the folk world to encompass wider delights that evoke, to these ears, classical, chamber and early music, with elements of European and World influences appearing too. The playing of both Adam and Murray is virtuosity personified, and the aforementioned technical matters do not prevent the obvious chemistry between the two being fully realised.

Take in the CD in one complete sitting, or indeed walk, (both highly recommended), and you will be transported on a musical journey that will touch every conceivable human emotion, as the duo eke out nuances that will both play out in the mind and affect your physical well-being. Thus tunes such as their version of the traditional 'Salmon Tails' with its darting, flitting rhythms, and 'The Highwayman's Rat', a Summerhayes' piece arranged by both, with its catchy, energetic feel, complete with percussive taps, are two examples of offerings of a more upbeat, cheery nature. Contrast this with, for example, the melancholic yearning of 'Neil Gow's Lament', (For The Death of his Second Wife), the tune from the most famous Scottish fiddler of the 18th Century, here rendered as a version which would bring a tear to a glass eye.

The traditional Scottish reel 'The St Kilda Wedding' is unadulterated aural bliss, whilst 'Time's Slow Dance', another Summerhayes' composition (Arr. Summerhayes & Grainger), sounds both elegant and sophisticated, more in a classical mould, and then 'Not Midnight After All' awakening Celtic/Gaelic memories, all of which emphasise the varied nature of the fare presented.

I suggest that there cannot be too many tracks that were partly conceived and recorded in the back of a car, but evidence from Episode #2 of the videos suggests that is the case for their stunning arrangement of the traditional 'Sweetest When She's Naked', and ' Unforseeing' a meditative tune in which one can only admire Adam's use of subtle bow strokes in a way similar to an artist's brush strokes.

Three longer pieces 'Still No Closer', 'Six Hours' and 'The Forgotten Wedding' provide contrasting tempos, textures, tones and atmospheres and offer further evidence of two consummate musicians performing at the height of their craft; there is an extraordinary musical consanguinity evident in what is presented here, all the more remarkable given the circumstances.

The importance of cider to the pair is self-evident, and with The InCider Sessions, The Ciderhouse Rebellion would appear to have also advantageously taken musical draughts deep from the well of Bacchus - immerse yourself fully in their offering and you will be richly rewarded. All hail to Murray's Most Marvellous Musical Manipulation Machine

Black Is The Colour