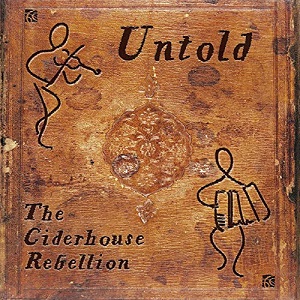 
Civilised societies create and enforce rules by which citizens are expected to abide. These can be based on ten commandments handed down from a mountain top, or from basic rights enshrined within a nation's constitution. However, some rules are less easily agreed upon, or even understood, and are consequently either broken or ignored. In John Irving's novel The Cider House Rules migrant workers at an apple orchard are given a written set of rules, even though they are all illiterate. As a result, they are unaware of the rules that exist but live their lives by their own collective code.

According to the sleeve notes for 'Untold', one evening last year, just as virtuoso violinist Adam Summerhayes and noted accordion player Murray Grainger had completed the final recording session for their upcoming album, one of them suggested that there was enough time before dinner to 'quickly' record an entirely new improvised piece - perhaps based around a series of meditations or lullabies. With complete disregard for their own 'album recording' rules, i.e. 1) Prepare - work out the repertoire and arrangements before entering the studio; 2) Rehearse - ensure that you know the work thoroughly; and 3) Allow plenty of time, and record each track a number of times; the duo simply hit the record button, and played.

Just under fifty minutes later, a synergistic entwining of twin streams of musical consciousness resulted in the two main tracks that make up 'Untold'. In this case, the rules had been understood, but broken and ignored, and a Ciderhouse Rebellion had occurred. A short two minute epilogue was then conceived as a prayer-like conclusion to the exercise, but otherwise the whole process had been achieved through instinctive playing and complete spontaneity.

But does 'Untold' pass muster as a stand-alone album of original music, an opus that can be re-played and appreciated as an original work? After all, many musicians indulge in spontaneous recording sessions, and improvisation is a key ingredient within many forms of jazz and folk music, even if it is usually rooted in a number of pre-formed ideas and retrieved themes. And, if 'Untold' were to become the basis for a Ciderhouse Rebellion tour in 2020, how would the initial version avoid becoming either a template, or memorised recrudescence, in future performances? Would it even matter?

Certainly as I listened to 'Untold', I became utterly bewitched by the beauty of what Summerhaye and Grainger had created. It could justifiably be described as a folk symphony, possessing cyclical completeness yet creating a form that is, at once, both elemental and pastoral. It suggests itself as the epic soundtrack to a film yet to be made - synaesthetic and panoramic in both scope and mood. It becomes a story without words - an account of how the minds and imaginations of two musicians can follow different paths, yet arrive at the same destination. Each creates their own spiritual space from which the other finds the inspiration to interact and continue, and somehow the results have been harvested and bottled. It is this inherent variety, sparkle and flavours discovered during this process that really define the project. As John Irving suggested in his novel, individuals may live within societal dictate, but they will still act and find their own sets of rules.