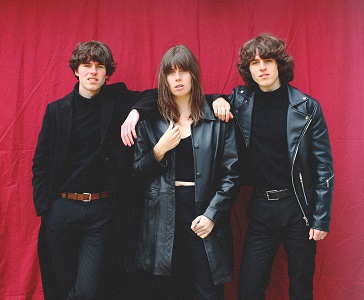 
The Choco La's new single was recorded in an improvised home studio at band member Bryony Dunn's parents' home when they were trapped there by lockdown. That said, it's an amazingly professional sound, and the balance on their trademark harmonies couldn't have been bettered at Abbey Road.

In fact, this single is a triumph of imaginative production that opens out a good tune and a pretty mainstream pop love-song lyric into a very nifty piece of power-pop.

The intro starts with a rolling muted guitar mini-riff before plunging into a wall of sound. Then the verse is stripped down to basics, letting the vocal dominate, before instruments and voices turn it up again, moving into a louder, densely structured format that's pushed along by a lot of warm bass EQ.

While the publicity blurb for the song stresses Fleetwood Mac as an influence, I also seemed to hear elements reminiscent of Paul Young in his Wherever I Lay My Hat phase, as well as touches of California folk-rock.

I'm assuming, given its "bedroom studio" origin, that much of the accompaniment is sampled or synth-generated, but I have to say that it sounds as if it emanates from a really good, tight band.

Over the top of that virtual band, twin brothers Jake and Luke Andrews join with Bryony in perfectly conceived three-part harmony and, yes, on the choruses particularly, you do get that warm, middy Fleetwood Mac ensemble sound.

But they're not just a one-trick pony. Judging by the instrumental production, they're also very skilled musicians and arrangers. If this were the early 70s, this would probably make a goodly dent in the AOR charts. In the 2020s, where niche markets have become much narrower, it's a great promotional recording for a band who, if they can reproduce this kind of quality onstage, will be something special in a live setting.