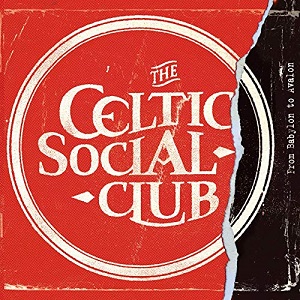 Formed originally in 2015 as a one-off Breton version of The Buena Vista Social Club for a French festival they've since played around the globe marrying pop rock with Scottish, Asturian, Irish and Breton folk influences. This is their third album and is again a rousing collection, one that opens in particularly poppy folk form on Sunshine, an instantly catchy number, even if the chorus lyrics and tumbling melody do basically recycle Blue Swede's Hooked On A Feeling, uillean pipes carrying it to the close.

Dead End takes the bounce up a notch or two with a dose of poppy 80s New Wave meets highland fling, before reining back in on pipes-accompanied mid-tempo swayalong I'm Free. Remember Joe Strummer introduces a lazy reggae rhythm (and the album title) in a chill out and lift your spirits tribute to the late Clash frontman.

Opening on spoken word about how you can't take it with you and how the likes of Herman Melville, Oscar Wilde and Charlie Parker all died penniless, sung in a pronounced Belfast accent Pauper's Funeral is drum thumping Irish folk stomp, the pipes and fiddle skirling along.

With a lyric that again speaks of death, they return to softer tones for Santiago, the chorus swelling on a tide of backing vocals, drums and keys sandwiched between a wistful pipes solo ending on drum rolls and tolling bells. Le Bars' pipes get showcased on his self-penned lively instrumental It's Morning John, heading into more jaunty down the pub territory for 'Ok Let's Go' with its "do you fancy a drink?/okay, let's go" call and response.

A brief unaccompanied interlude of the traditional Black Is The Colour with The Futreheads providing the choral backing vocals precedes the album's second guest collaboration, Indian vocalist Shreyas Patkar joining for the steady Lennonesque sway of the political statement of Black Lives with its distorted, fuzzed vocals and pipes

They round it off with Buffalo, a second band-penned instrumental, solo pipes joined by a lurching drum and bass led rhythm, fluttering electric guitar and electronic pulses and swirls for a Celtic twilight dance floor rave.

Their most immediate studio album yet, applications for membership are now open.

When You Need Someone