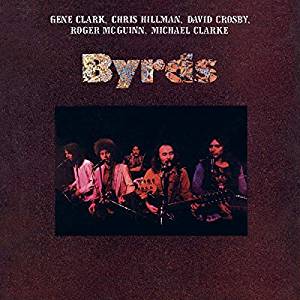 
This a new remastered edition of the modestly eponymous legendary 1973 reunion album by the classic lineup of The Byrds, which saw Roger McGuinn reunited with Gene Clark, Chris Hillman, David Crosby and Michael Clarke for the first time since 1966 (when Gene Clark left the band due to his fear of flying) and the departures of Michael Clarke – to join the Burritos – and David Crosby – to join CSN&Y). Initially, at least, the reunion idea was something of a business proposition from Asylum boss David Geffen, and eventually, once McGuinn had disbanded his then-current Byrds lineup (once they’d recorded the last of their patchy, contractually-obliging Columbia albums Farther Along), things got under way. It was never intended as anything but a one-off release, and the band members certainly viewed it as an alliance of solo artists, rather in the fashion of CSNY perhaps.

The resulting album was finally released in March 1973, and while the trademark Byrds jangle and great vocal harmonies permeated a majority of the cuts there were still plenty of other delights on offer, and it stands up well today – even better than I’d remembered it (I’d not even bothered to replace my vinyl copy with a CD reissue, so I’d clearly underestimated its strengths).

Byrds was also a very even-handed record as regards composition credits, with McGuinn, Clark, Hillman and Crosby each bringing two songs to the table. Strongest contenders to my mind were McGuinn’s mando-rich Sweet Mary and Crosby’s seriously beautiful, ruminative Laughing, with Clark’s Full Circle (originally slated as the album’s title track) not far behind. McGuinn’s Born To Rock And Roll was a touch strange though, stemming from a sequence straight out of I Shall be Released before rocking out in the approved fashion. The rest of the originals were a mixed bunch, but despite a fundamental lack of overall cohesion they get to hang together unexpectedly well given the nature of the project. The remaining three tracks were covers. Joni Mitchell’s For Free, maybe an unexpected choice, was joined by two Neil Young numbers: Cowgirl In The Sand, which arguably lost something of its epic Crazy Horse stature, and (See the Sky) About To Rain, which here (surprisingly) appeared almost a year in advance of Neil’s own release of that song (on his On The Beach album), and is a real treat with which to close the album (and a great follow-on from Crosby’s Laughing).

The absence of bonus tracks on this latest edition of the Byrds album is explained in the comprehensively informative booklet essay – where McGuinn confirms that the only outtakes from the album sessions ended up on his own first solo album later that same year. So what we have here is everything recorded at those sessions. And as such, while not necessarily an out-and-out essential purchase, Byrds is still a classy and superior example of quality, vintage 70s country-rock that, with hindsight, can be viewed as an important final collaborative staging-post for these particular musicians, all of whom had grown creatively since the heyday of the original band.