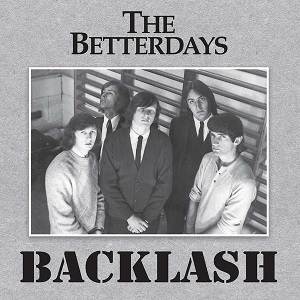 
So 'Backlash' turned out to be quite some learning experience. A history lesson all around The Betterdays, the band who were banned from all the Top Rank venues in the UK in 1965 for playing black music. Never mind their peers, The Rolling Stones, they were the real Sex Pistols of the day. Reading further as the 24 track 'Backlash' album plays in the background providing the soundtrack, it's a fascinating and enlightening tale. One of a band who were allegedly "ahead of their time in the early Sixties."

Like The Stones, whose own recent 'Lonesone & Blue' attempt to revisit their past gained some plaudits, 'Backlash' brings together an authentic feel of early Sixties British R&B and blues including covers of songs by Chuck Berry, John Lee Hooker and Bo Diddley. Naturally, the British stamp gets stirred into the mix on a record about which rhythm guitarist Mike Weston boasts: "if you want to know what the fuss was all about in 1964 and why all the R&B bands swept the UK, this album will explain to you what it was like to walk into a club. It really does capture the true sound of the group in 1964."

So the almost lost tapes - "a painstaking lengthy labour of love" - revisit 15 unreleased tracks and cuts from the 1991 reunion album 'No Concessions' and take us back to what could be tongue in cheekily called the better days. In truth they were the ground breaking, genre setting, pace making days as a list of their 1965 tour dates includes Rochdale's Kuba Club, several Lidos and a mini tour of Oldham. It does feel quite exciting to sit back, close the eyes and drift back some fifty plus years and wallow in the musical scene as The Betterdays take the black American blues and R&B songs and along with the stones and Yardbirds, British-ify them and create a whole new genre and exciting direction. It's hard to spot the joins at times. Mike Weston's dense and swampy 'Working Man' sounding just as authentic as the rollicking 'Route 66' which it follows. Other recognisable 'standards' that get a dusting off and thorough polishing see John Lee Hooker's 'Boom Boom' and Berry's 'Too Much Monkey Business' line up alongside less recognisable gems. Talking of thorough polishing, rest assured these songs don't suffer the smoothing process offered by modern studio methods. "It's about feel and not music for the head," Weston adds. Never a truer word spoken.